Research of a Very Different Sort

I Try My Hand At My Character's Hobby

Dahlia Rehnquist, the main character of my work-in-progress Over the Edge, has a unique hobby: she makes bread dough figurines of her friends and family. Her figurines are quite a bit better than mine. As they should be - Dahlia spends hours and hours on each figurine, adding painstaking detail such as a violin for her best friend and a soccer ball for her brother. In the interest of "getting it right" - and of having a fun craft project - I decided I needed to make some bread dough figurines of my own. As research.

It's a very enjoyable kind of research. I had a great time.

First, I found directions for making the dough. I needed a recipe that uses white glue and a slice of bread. I'd seen Peruvian figurines made from this type of bread dough and the dough is much finer than the grainy recipes I remember as a child that used a cup of salt and flour and water. 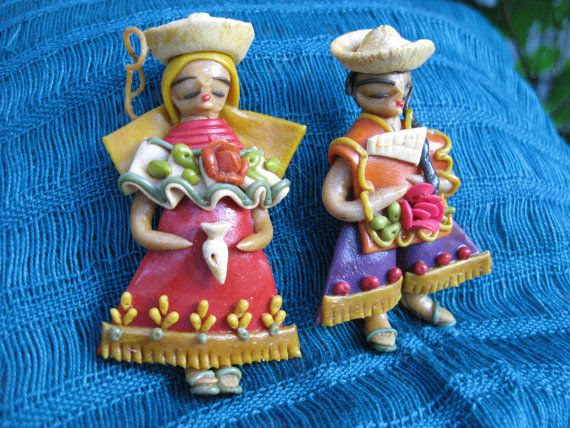 Next, I invited friends over for lunch and a crafting party. They came with their darling 4-year-old twin daughters, and - after a tasty lunch of strawberry shortcake - we got right into the project. 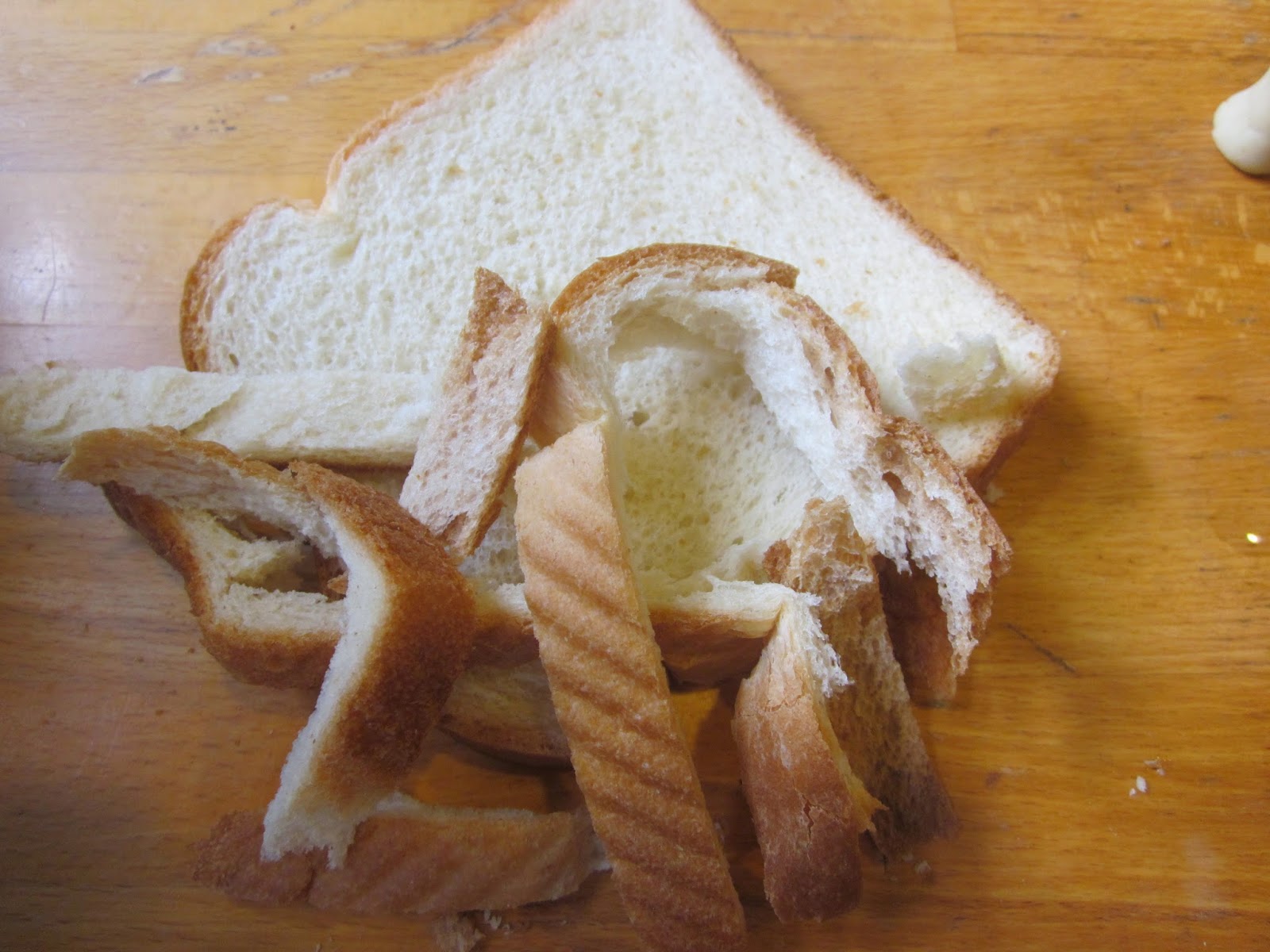 Tearing The Crusts off a Slice of White Bread

I passed out a slice of bread to each person. We carefully tore the crusts off and then shredded the bread into little bits and tossed them into individual bowls. Then we measured a teaspoon of white glue into each bowl (which became much easier when my husband took the lid off the glue dispenser). I dribbled a bit extra into mine, since it seemed somewhat dry. 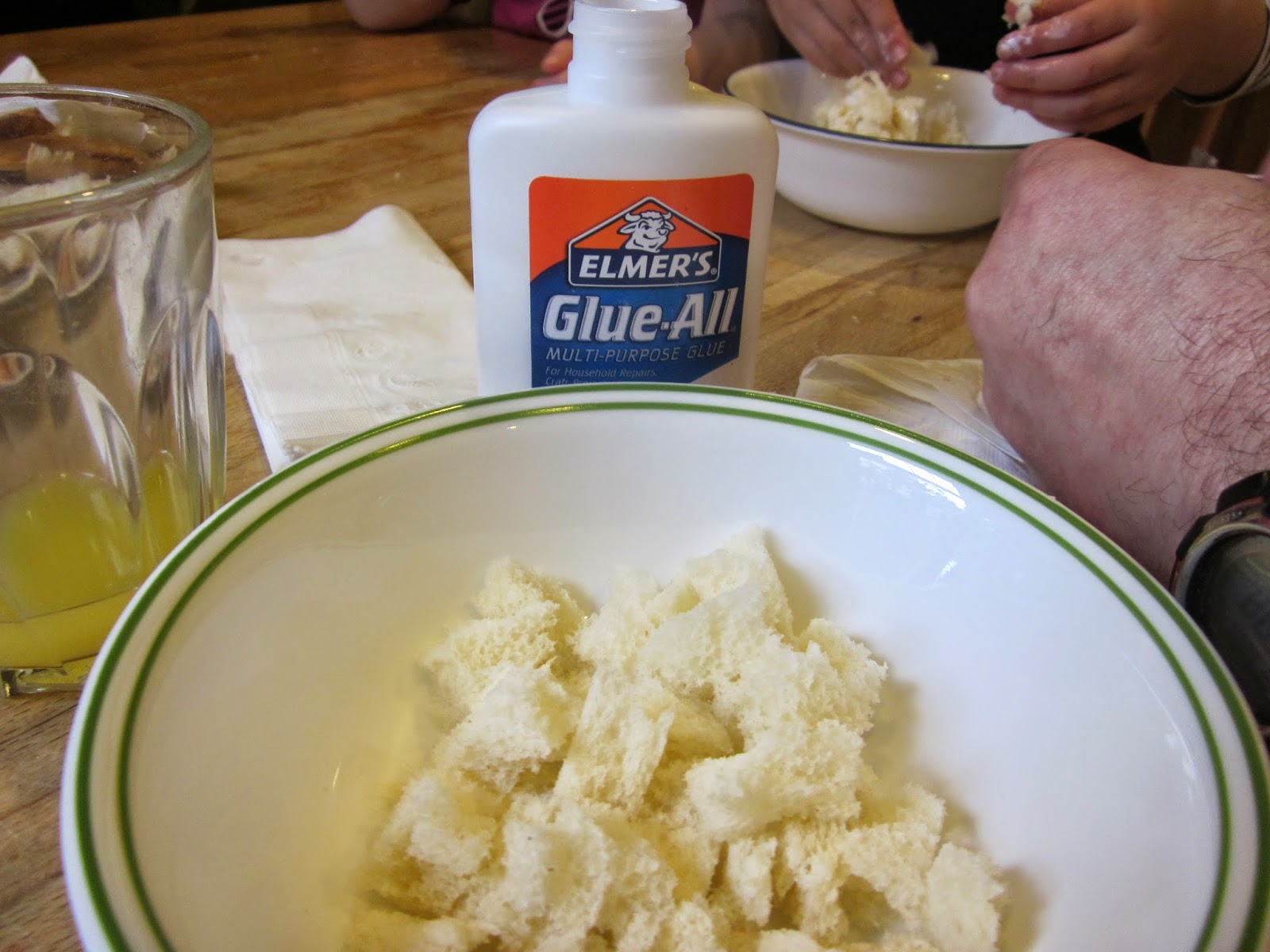 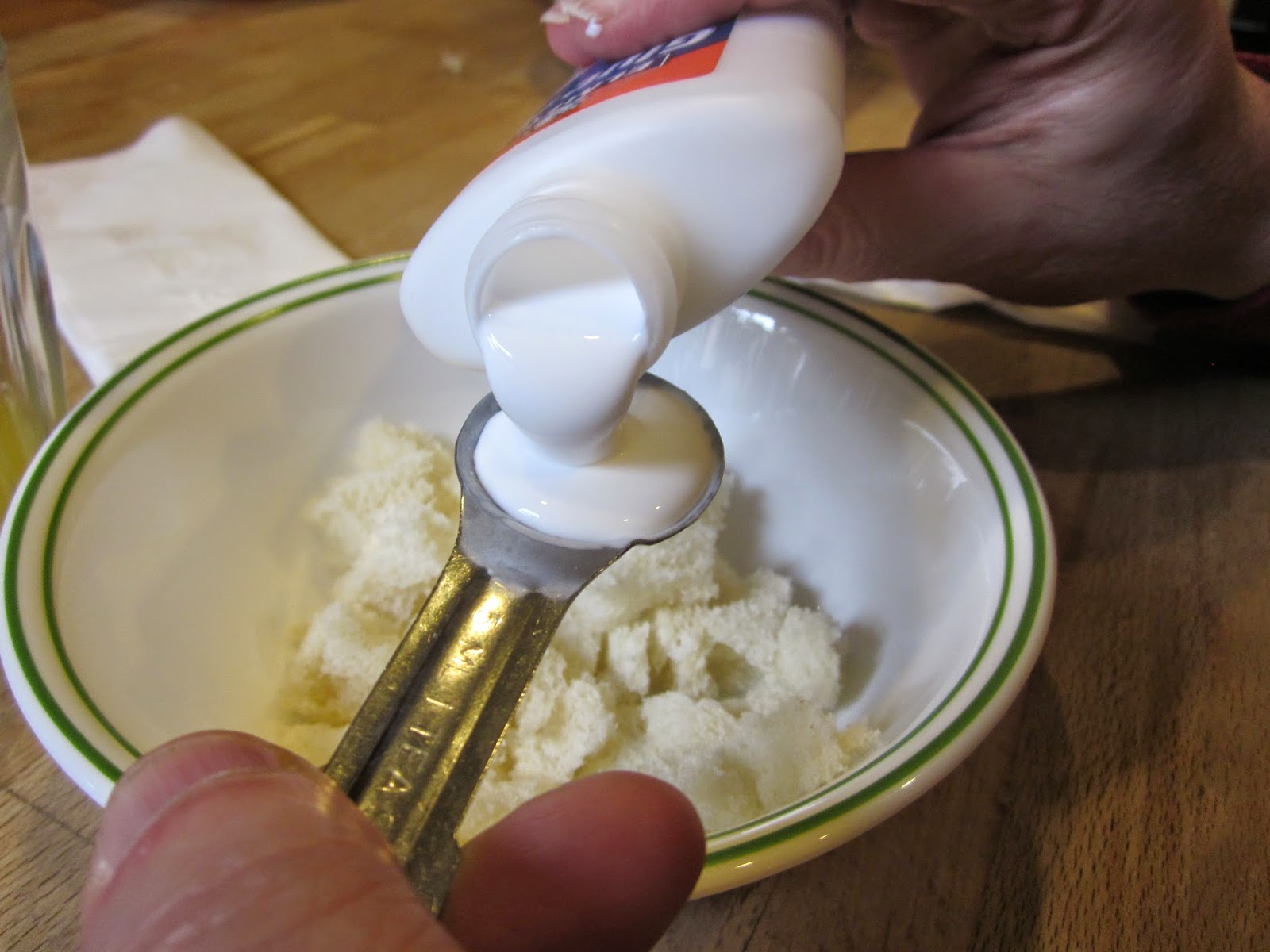 Next we worked it in our fingers until it became nice and smooth and stopped sticking to our fingers. The more it was worked, the nicer it felt. After only two or three minutes of kneading my lump between my fingers, it was ready to go. What surprised me was that a single slice of white bread - without crusts, no less - made a piece of dough about the size of a golf ball. 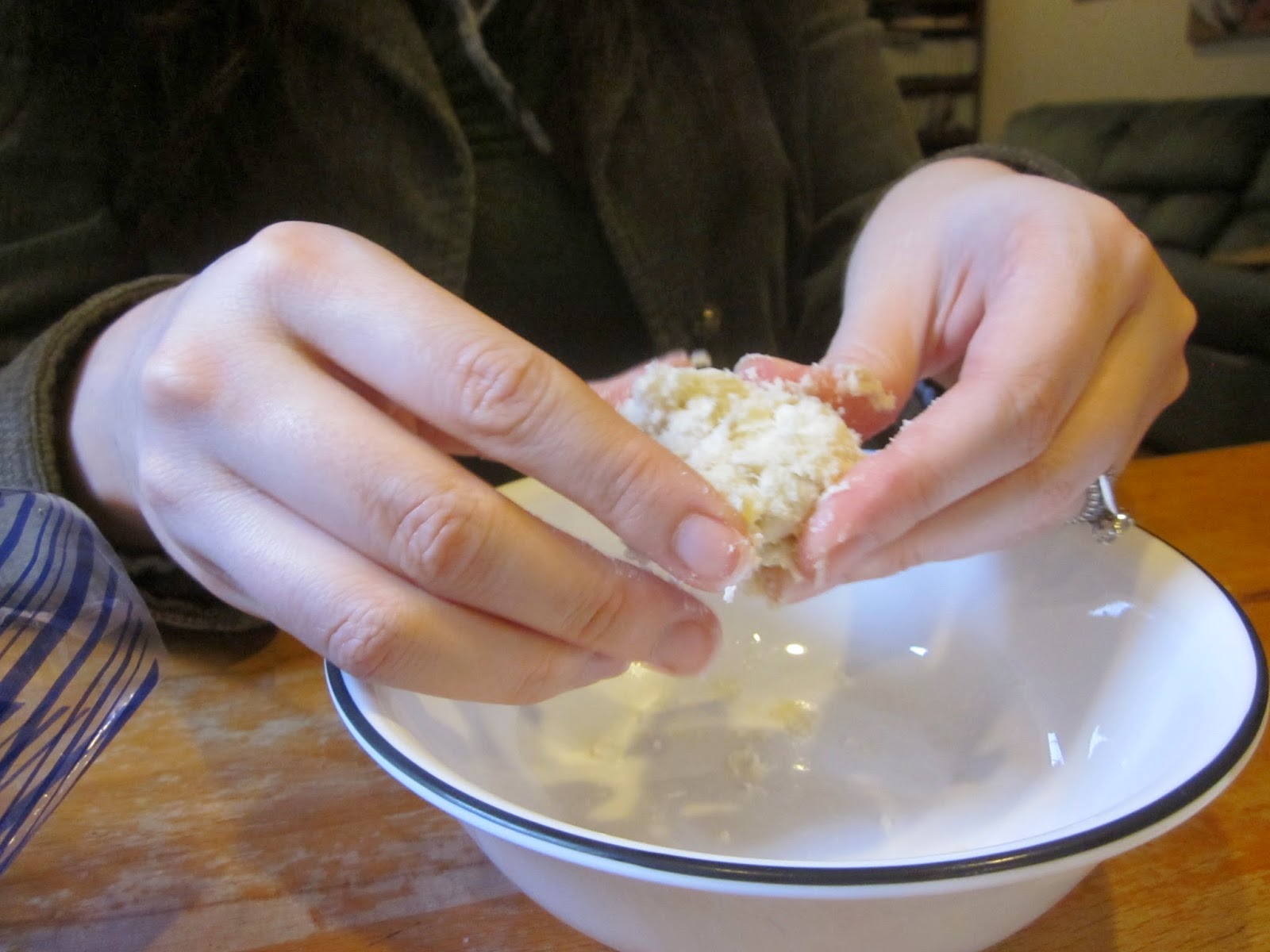 A Bit Messy at First, But Not Too Bad 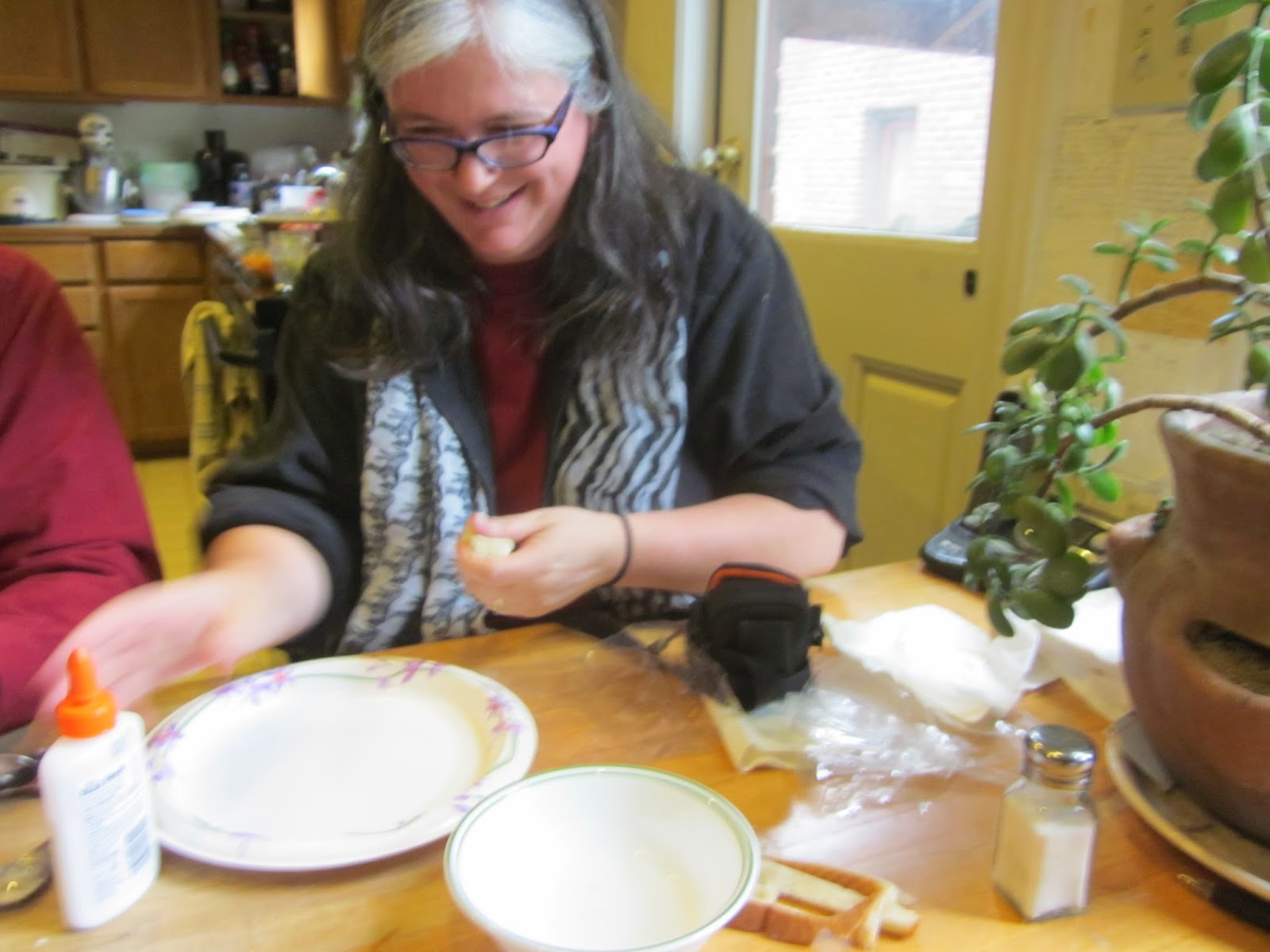 This is Me, With my Ball of Dough

My plan was to make the same figurine I was going to have my character make in the novel. It was supposed to be her best friend, Dawn, a woman with a long black braid playing the violin. I quickly abandoned that idea, deciding that the fictional Dahlia Rehnquist has a lot more patience than I do! The violin I made for my figurine to hold left something to be desired, for example. I showed the sort-of violin to my little friends, and they looked perplexed. "What is that?" asked one of them, "is it supposed to be a turtle?" Needless to say, I didn't use the violin. 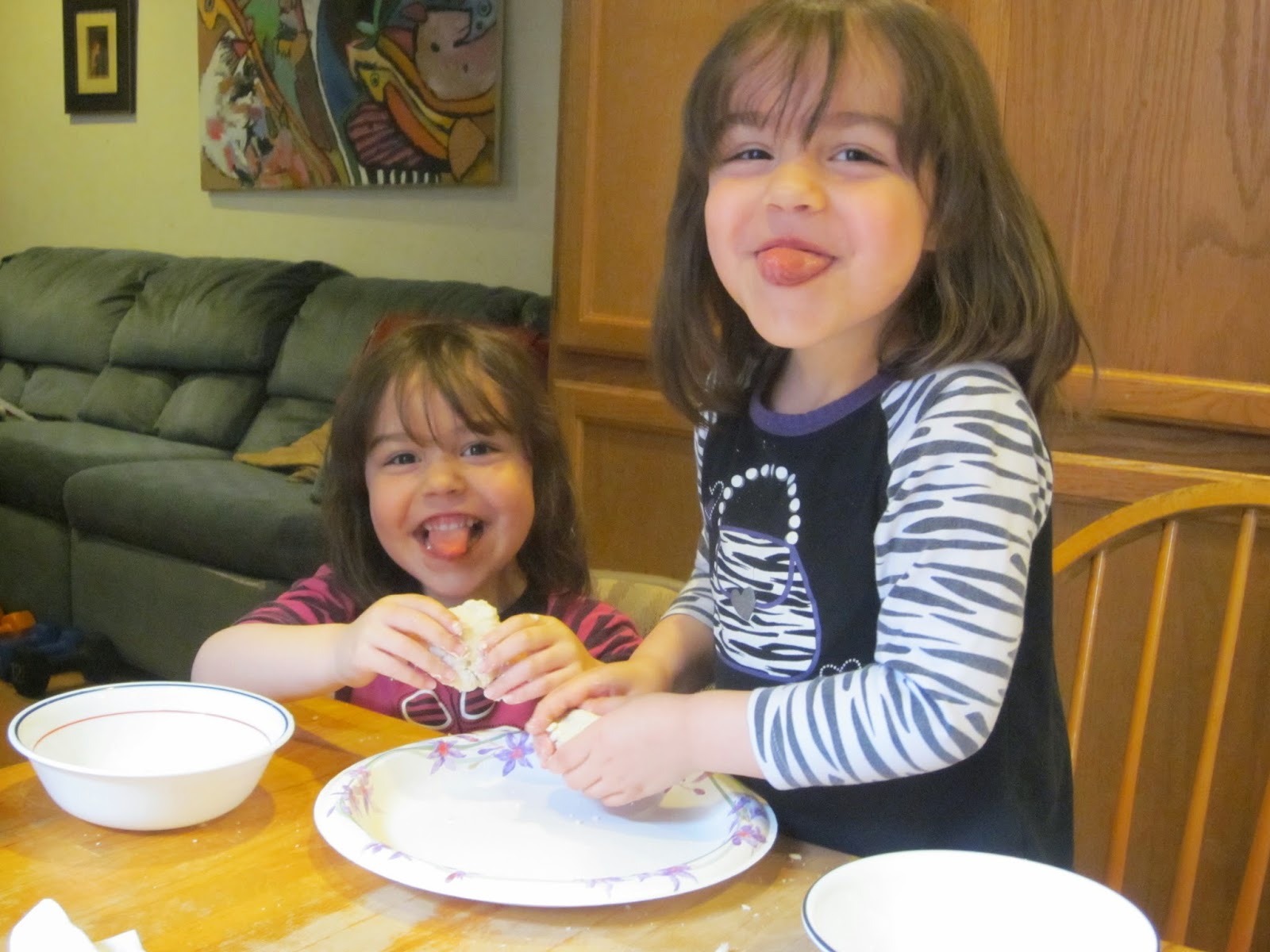 Poking Fun at the Photographer 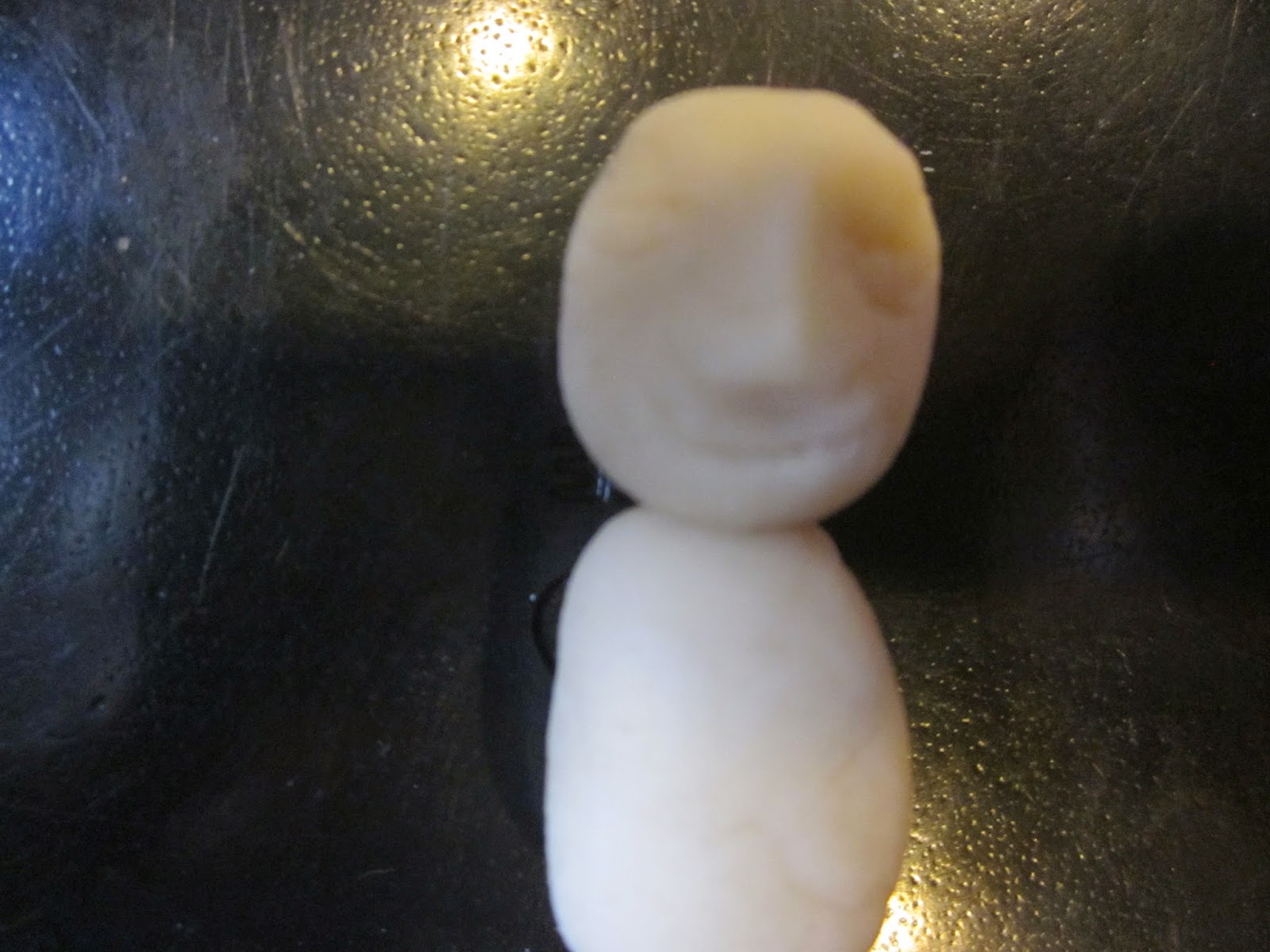 The Beginnings of My Figurine,
Looking Rather Like An Easter Island Rock Sculpture 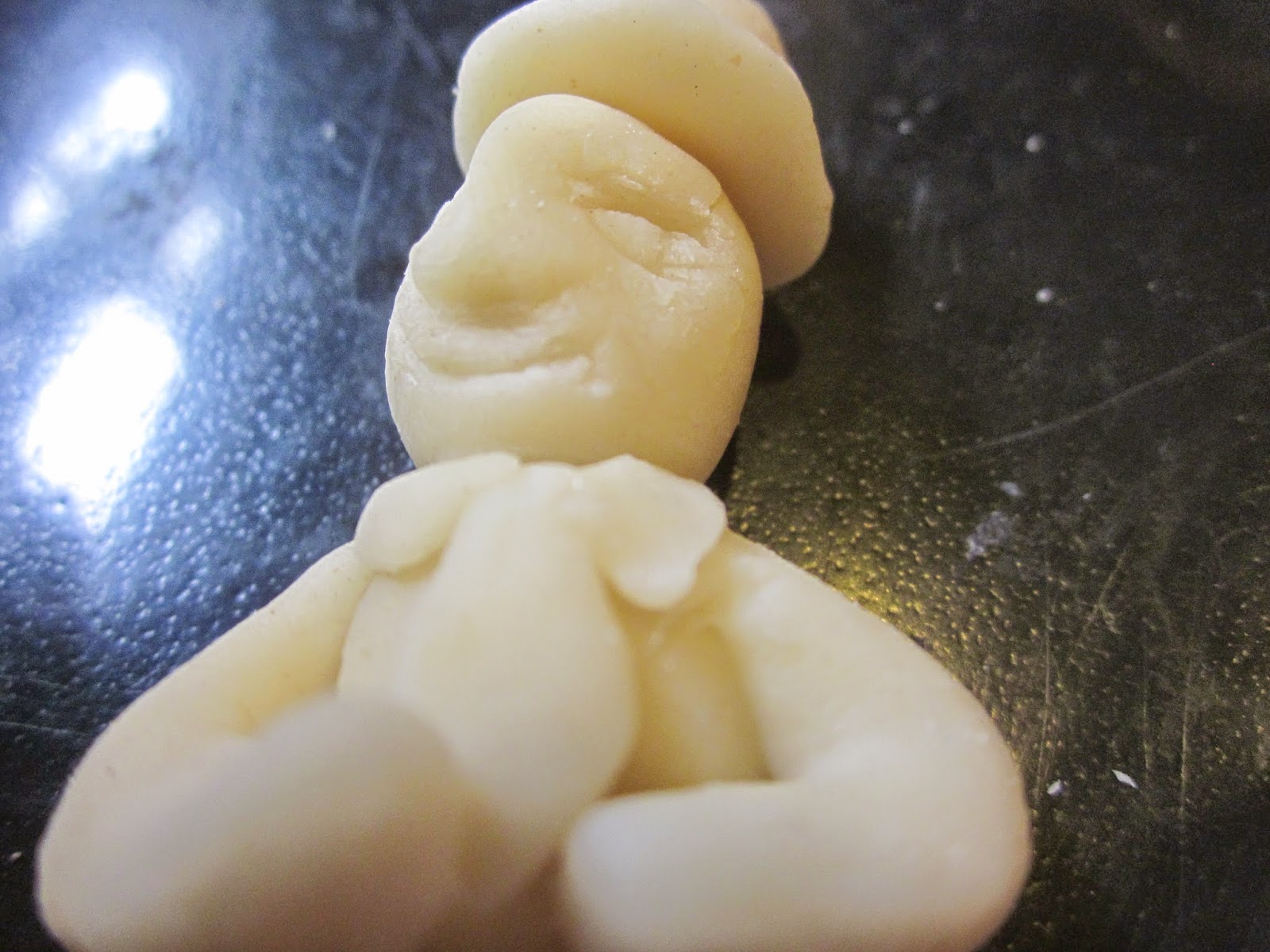 My Figurine, With a Dashing Top Hat and a Tie 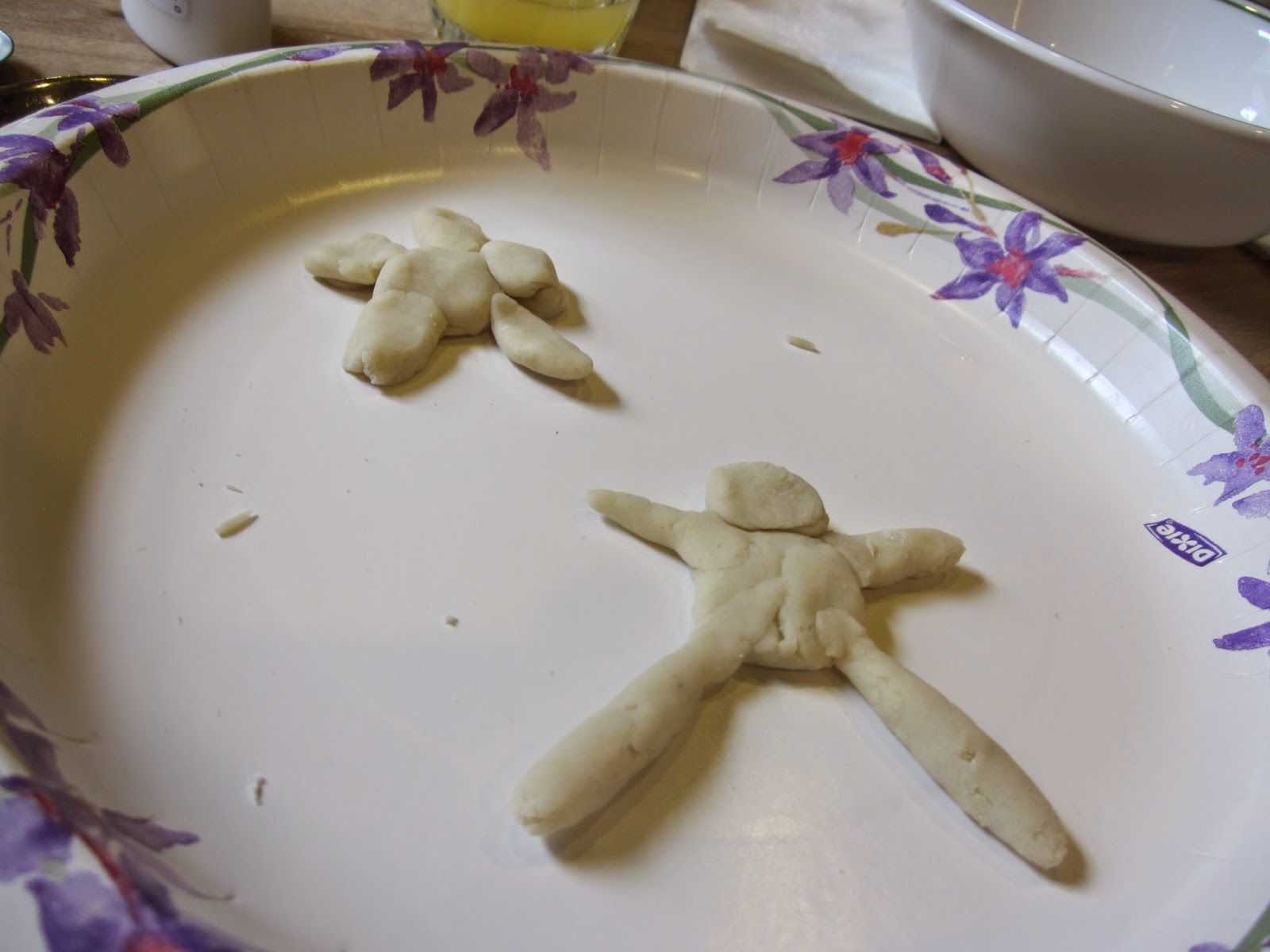 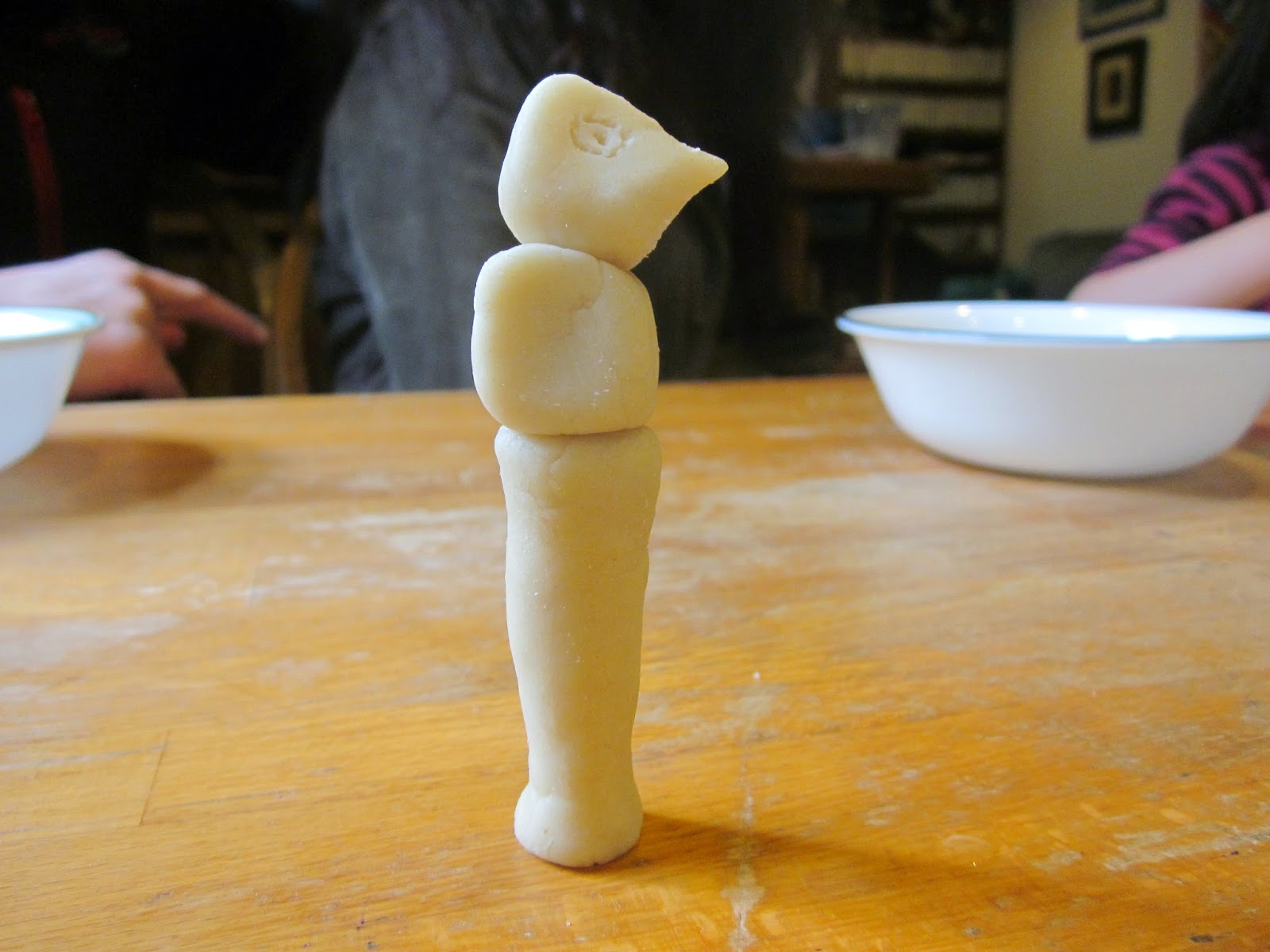 Their Father's Figurine - Duck Man on a Pedestal

It was a fun hour we spent playing with the bread dough. We used drops of water to stick the pieces together, but I have the feeling that it didn't quite do the trick. If I were to do serious figurine-making, I'd want to find a better way of sticking elements together. We'll let the figurines dry for two or three days, and then, if they make it that long in one piece, they can be painted. An alternate method of adding color is to add drops of food coloring to the dough as it is being mixed. I read that finished figurines can be given a protective, glossy finish by brushing them with a mixture of half water, half white glue.

The upshot of my little research-craft project? It was fun! I also confirmed my belief that Dahlia's hobby is a good fit for my novel. She will be able to procure the supplies she needs, which are few, and she'll be able to do this very low-tech craft project.

An update, just because I thought you'd like to know. Last night, I caught my top-hatted figurine (the one pictured above) with the edge of my sleeve, and the poor guy went skidding across the table and crashed onto the floor. He bounced! And then he rolled to the other side of the kitchen.

But - guess what? He survived without a mark! He didn't fall apart. His head didn't separate, his hat didn't fall off. Nothing! So I guess the water-as-an-adhesive works just fine.

Another update! Yesterday I accidentally doused my little guy with water. He was soaked. Saturated. Sopping wet. I set him on the windowsill to dry, turning him over a couple of times. I thought he would be a goner, all sticky and yucky and disintegrating - but when he dried off, he was fine! He's none the worse for wear. He is strong and hard. I have to say that I'm very impressed with the hardiness of the white glue - bread dough recipe for making figurines. 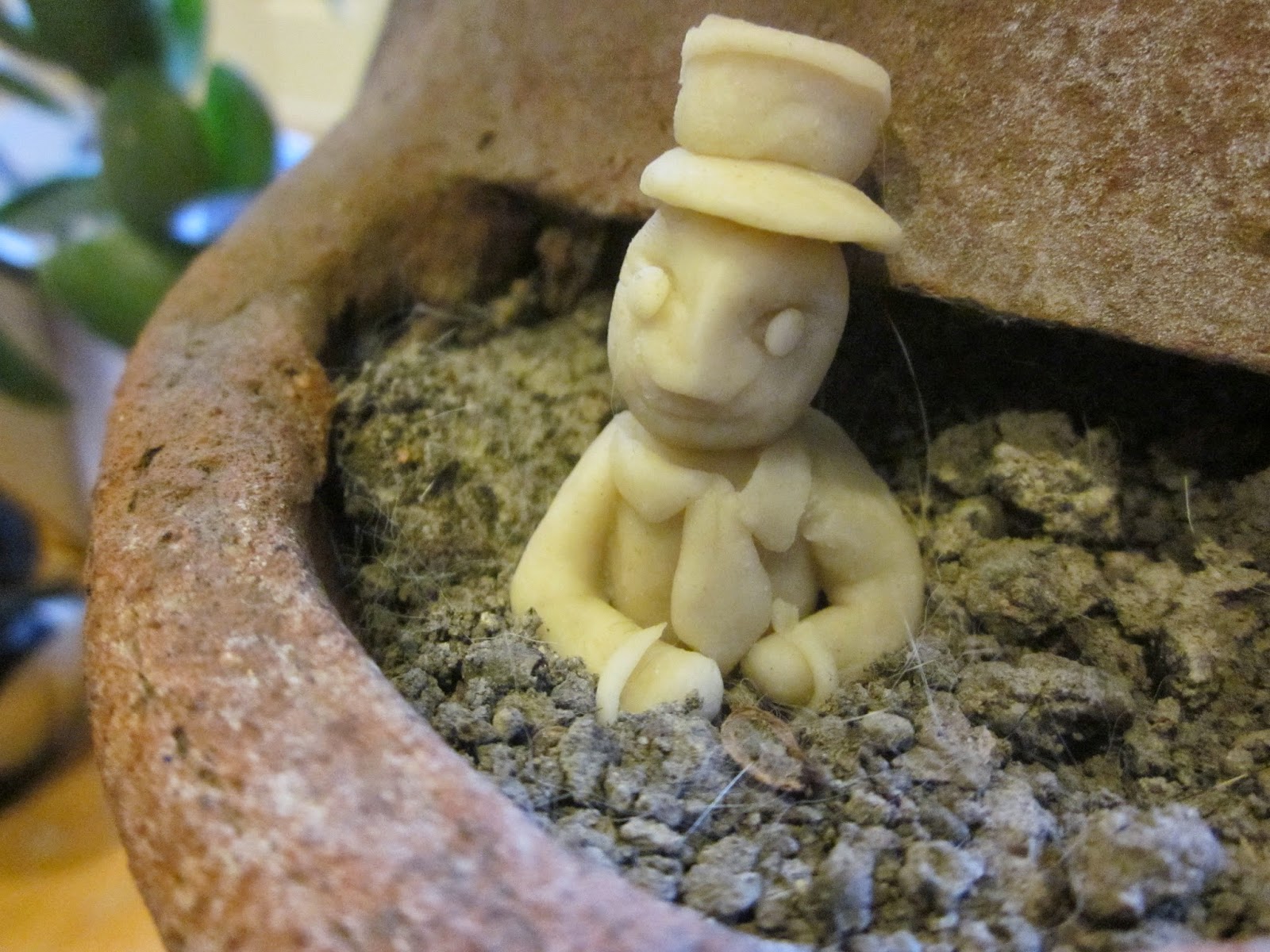