Guest Author
***
I am pleased to have a visitor to my blog today. Zoe X Rider is a friend from the wonderful, extremely supportive erotica section of the online forum Absolute Write, where I have been a member for four years. Zoe has a book release today, and I've invited her to write a guest post and share her novel. Welcome, Zoe!

I'm pretty sure I didn't always think about guys falling in love with other guys, though I did grow up watching The Monkees, shared not only a beach house but a four-person bed. I just didn’t quite realize why I loved The Monkees so much.

My love of m/m hit around puberty, which was about the same time my family got a VCR. (They were enormous back then—in size, I mean, not just popularity. The play button on our JVC VCR was as big as one of today's cell phones.)

One of the first movies my father rented (he was the one with the video rental card, and he never took us to the rental store with him) was the original Lord of the Flies. This event predated puberty by a few months; I loved the movie—those boys fending for themselves on an island with no adults interfering—but, as with The Monkees, I didn't quite understand what I loved about it so much. A few months later, I discovered a pile of William Goldman paperbacks at a flea market. Mistaking him for the guy who wrote Lord of the Flies (that would be William Golding), I bought ALL THE BOOKS. I was disappointed when I realized the mistake, but I owned them by then, so I went ahead read them.

The book William Goldman is best known for—The Princess Bride—was not among the collection I picked up that day. If it had been, who knows—things might have turned out differently. Instead I had A Soldier in the Rain, Marathon Man, Magic, Tinsel…and The Temple of Gold, which was a slim paperback about Ray, who, at the start of the story, is in high school. Since I wasn’t far from high school myself, I cracked that one open first.

Oh my God, The Temple of Gold. There I was, just beginning to be infiltrated with hormones, and I was reading about Ray and his best friend Zock with growing certainty that these guys were totes in love: they go hiking, they read poetry, they run away to Chicago together. I was riveted, waiting for the big scene where they admitted how they felt.

But no. It wasn't that story.

If my father were alive today, I'd tell him that my predilection for gay stories was his fault. The Lord of the Flies-to-Temple of Gold connection is tenuous, since it’s based on a mistake, but the book he put directly in my hands a couple years later was not. It happened almost three decades ago, but I can see the whole thing like it was yesterday: I was in the living room, sitting in the blue recliner he’d fall asleep watching sports in. It was a boring summer afternoon, and we lived on such a remote road that I could sit in that chair all day and not see a car go by. My walked in and handed me a paperback, stiff with age, saying it had been one of his favorites when he was a teenager. With nothing better to do, I sat there reading John Knowles' A Separate Peace, drinking off-brand soda and becoming increasingly antsy: clearly Gene was in love with Finny. Any minute he would confess. I desperately hoped the feelings were returned, but I sensed heartbreak coming.

Alas, it wasn't that story.

By the time I discovered S.E. Hinton’s The Outsiders, I was in the full grip of teenage hormones, and my crazy ideas about the characters were helped along by the fact that the movie had just come out. (Mmm Matt Dillon.) By this point, I knew better than to hope for the romances to happen in the story; it was the eighties. Homosexuality didn’t show up in books featuring young adults. That was fine with me: I had plenty of room in my head to explore my own storylines. I got lots of mileage out of The Outsiders: Dallas and Johnny, Sodapop and Two-Bit, Johnny and Ponyboy. This was, in fact, the tipping point. Up till now, my fantasies had been exclusively me and some cute boy from school, or me and John Taylor from Duran Duran, but now all these guys were taking over: falling in love, making out, fighting, fucking, taking what they wanted from each other with neither apologies nor excuses.

The men were running rampant in my head.

During my teen years, I plowed through the rest of William Goldman's back catalog, from 1960's Soldier in the Rain to 1986's Brothers. There were a few I couldn't get my hands on, but I read everything I could. There were no more Temple of Golds in that back catalog, but I enjoyed them. And then I more or less forgot about William Goldman, until a day a few years ago, when I found in a used bookstore one of those books I hadn't been able to find before: Your Turn to Curtsy, My Turn to Bow.

It was The Temple of Gold all over again. Best friends, tons of homosexual subtext. Chad was totally in love with Peter—you can't tell me any different. And, of course, no actual payoff. Just the lingering sadness of what was hidden behind the text.

I still love finding storylines where I can read between the lines, whether the author intended there to be anything between the characters or not. It's not what I write—in my own writing, while I still have a fondness for stories about guy friends (who fall in love), and stories where guys shouldn't be into each other (but are), I get to bring everything into the open. But I'll always treasure the books where I find those storylines buried in the cracks. 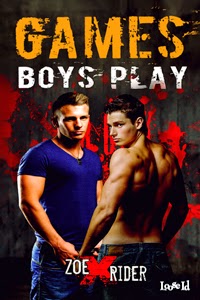 Brian and Dylan have been best friends for years. They have no secrets between them—except for the ones they’re keeping from each other.

When Dylan walks in on Brian engaging in self bondage, Brian’s mortified, but Dylan’s intrigued—to the point of offering to help Brian out next time he gets an urge to be tied up.

No. That’s all Brian can think. No way. But the idea of someone else being in control overwhelms his thoughts, and self-bondage is suddenly a pale substitute for the real thing. He gives Dylan permission, on a trial basis, and comes face to face with a side of Dylan he’s never seen before. A really hot side.

As their games pick up steam, so does their relationship, along with Brian’s courage to go after the things he wants. Like, Dylan.

It might be happily ever after, but there’s one secret left, and it could ruin everything.