Snapshots of a Writer

An Art Show - Kind Of 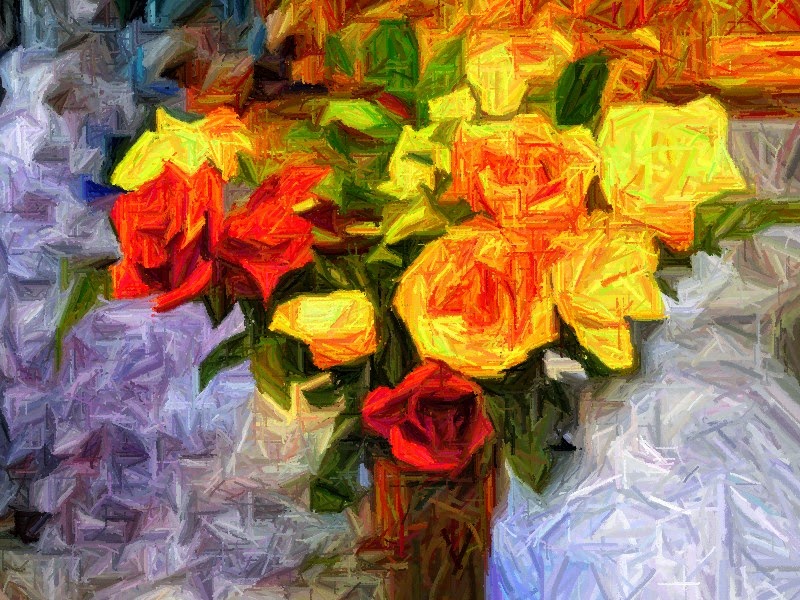 This is the bouquet my sister-in-law sent to me
when my first book was published.
The image has been altered in very cool ways.

Last night, I was up until 2 o'clock in the morning altering photographs. I'd dragged my laptop into bed with me - I have this sweet little lap table to perch it on - and pushed away curious cats. I made sure the clack-clacking of the keyboard and clicking of the mouse wasn't bothering my husband, and then I let myself have fun. And it was fun. I had so much dang fun I couldn't stop myself. (See how I just used the word "fun" three times in a row? Rebecca, my editor, wouldn't approve! My excuse is that I was up until 2 o'clock last night.)

It's all because I discovered this wonderful picture-editing tool on my image program. 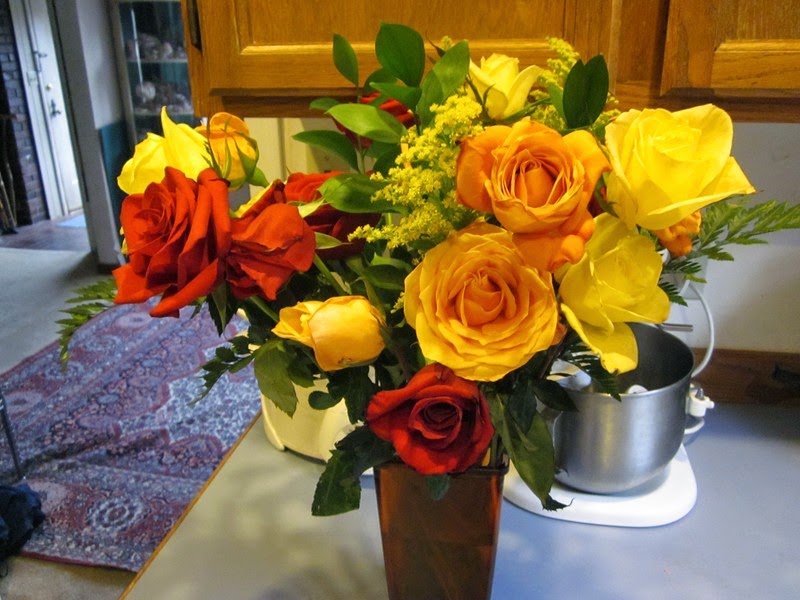 This was the original version. The mixer had to go.

I use Microsoft Digital Image Suite 2006. I have no idea if that's a good editing program or not, but it sure has some fun ways (...fun!...and there I go again!) to alter an image. So I thought I'd alter a series of photos, some recent and some a bit older, and use them to illustrate and chronicle my writing past. 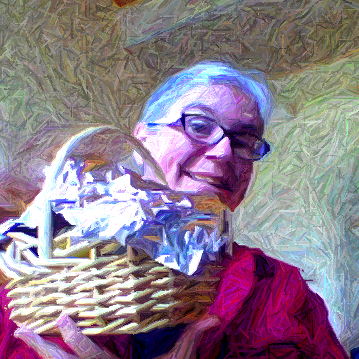 Me and my Breakfast Basket

It was about three years ago. I was at the first-ever writer's retreat in Icicle Creak, Washington, run by Hugo House in Seattle. I had this sweet little cabin all to myself. It had a bunk-bed ,and a table and chair combo for writing, and a picture window that took up an entire wall and let in streams of light at 5:30 in the morning. Perhaps best of all was the breakfast basket sitting on my doorstep each dawn. I Skyped with my husband (but not at 5:30 am!) and proudly showed off my basket. What you don't see is me taking out each thing individually and showing them to him. I'm not sure exactly how he did it, but he took this picture during our Skype session, which explains the weirdly cool angle. And now I've altered it and made it even weirder. 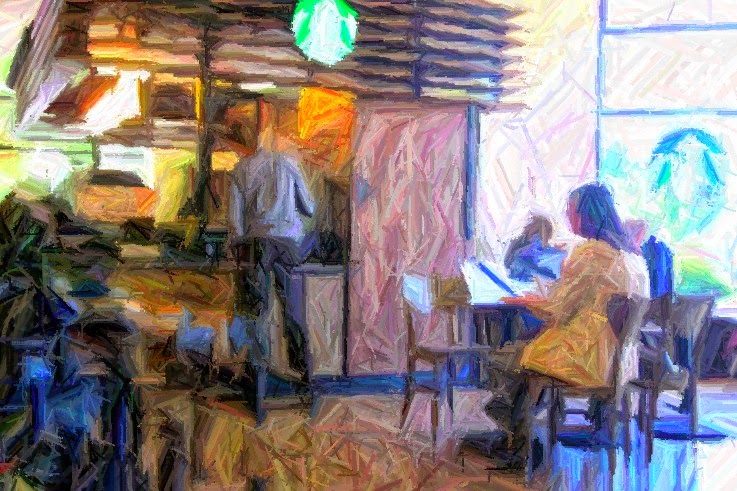 At the Starbucks in the Hospital Lobby

That's me in the white sweater. This is the same location where I overheard some of the snippets in my two "Intrepid Eavesdropper" posts. It's a nice little place, big windows, lots of people-watching. The funny thing is...in real life, as I sit here at the kitchen table on this Tuesday morning, writing this post for my blog - I am about to head to this Starbucks. In fact, I will probably finish the post at the very same table in the image! So how about that? 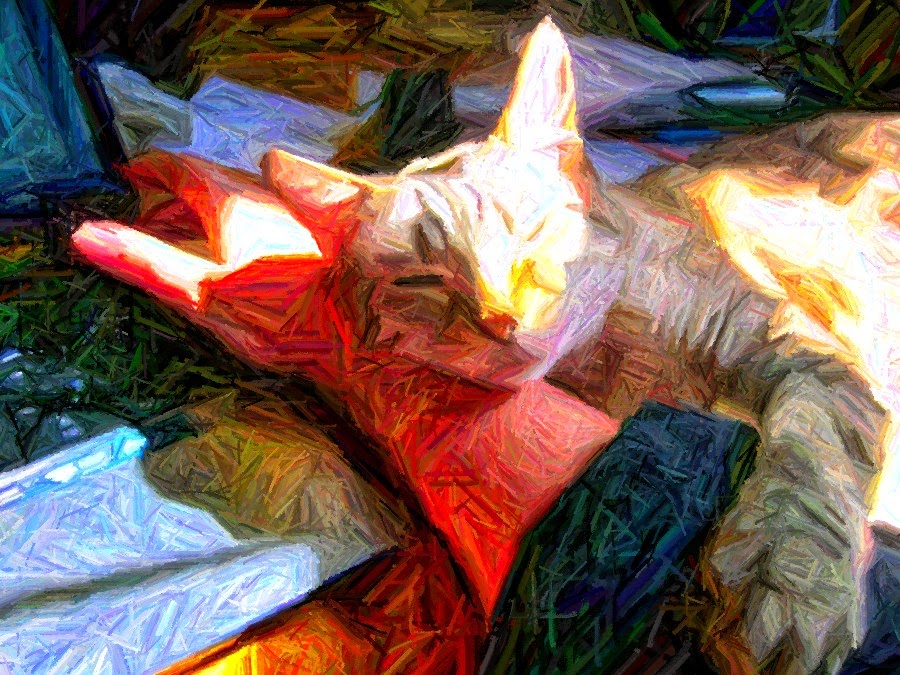 Linky is a sweetie, but sometimes he figures that he's more important than my novel. On this occasion, I'd just spent ten dedicated minutes petting him, which was an odd sort of torture because I had a glaring typo on the screen that I badly, badly, badly wanted to correct so I wouldn't have to stare at it any longer. But no. Cat on arm is more important. 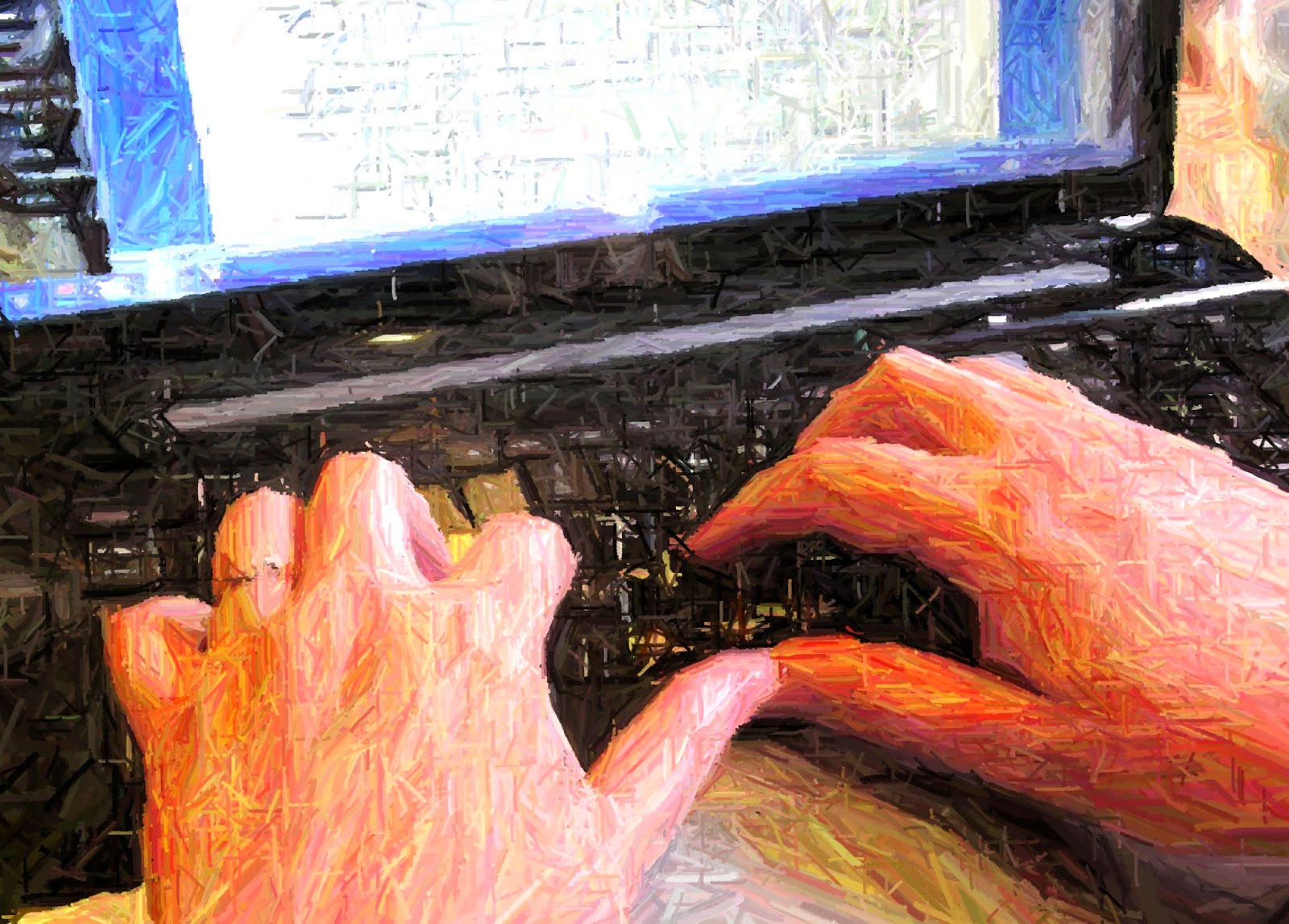 Working on my Novel 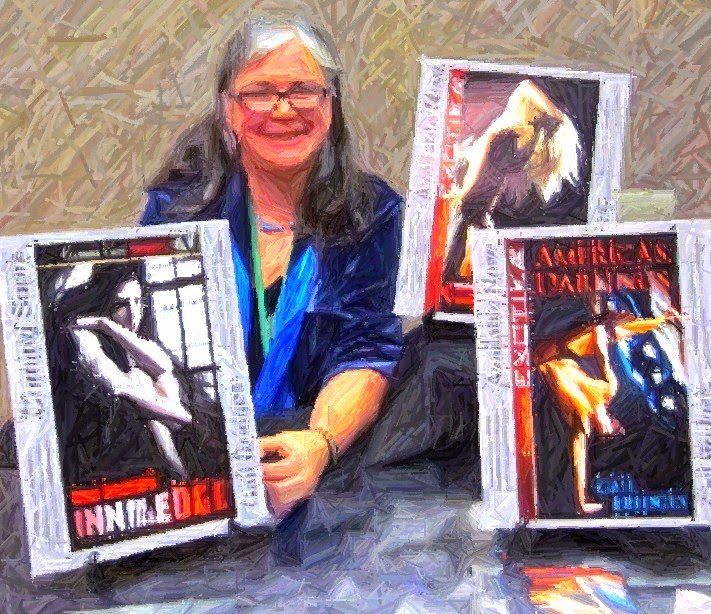 I was at the Emerald City Writer's Conference last October. I'd reserved a table at the book fair...because I am an honest-to-god REAL LIFE author now! I have three books! I have posters and swag and the whole bit. I asked the lady at the next table to abandon her post for a moment - this was about two minutes before the doors were to open - and snap this image of my first time publicly being an author. 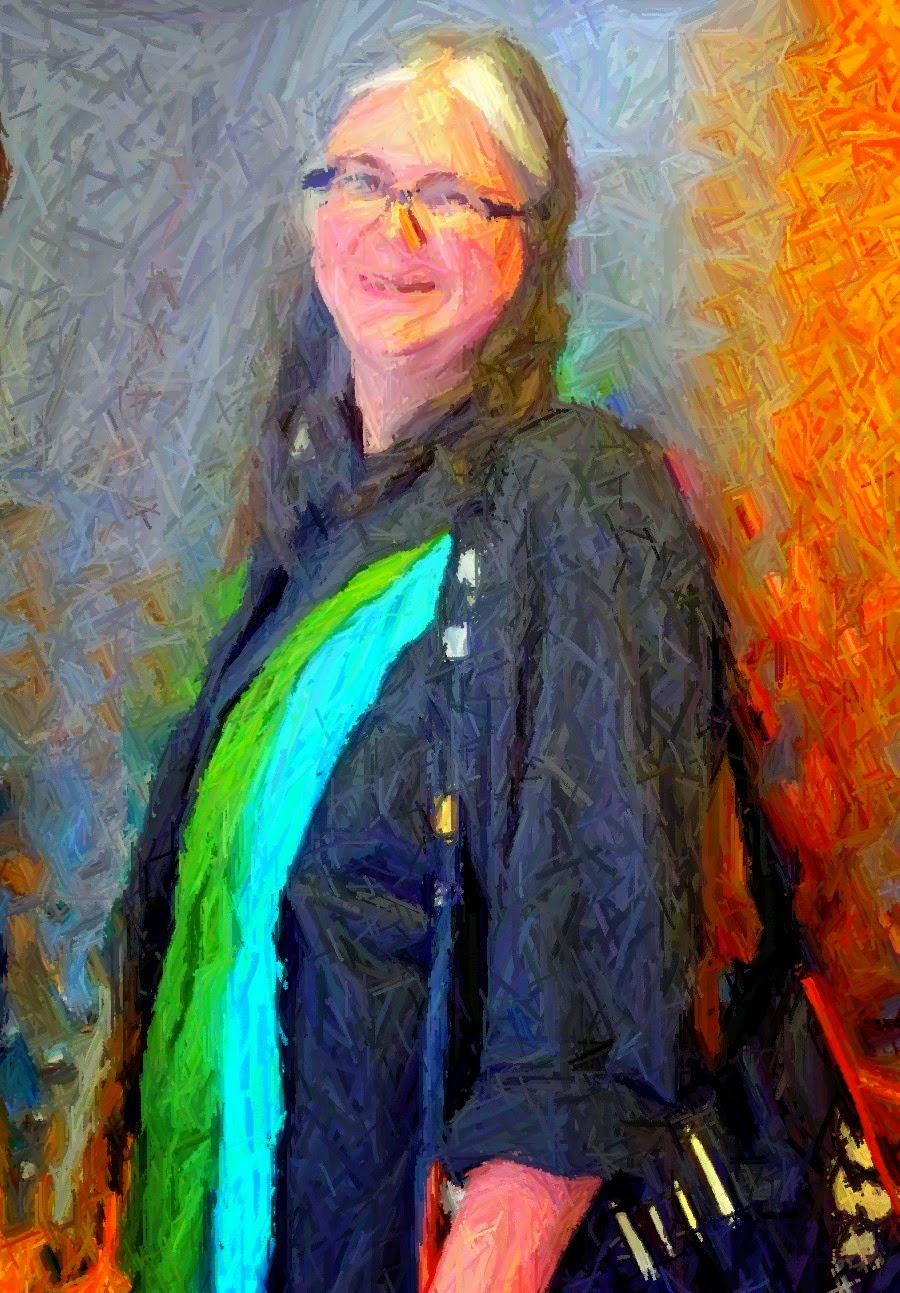 Going to the Coffee Shop

My husband took this shot of me last week. I was out the door, on my way to Zoka (the second "Intrepid Eavesdropper" location). "Hey," I said, handing him the camera, "do you think you could take an Author Photo of me? Right now, right here?" He moved me from place to place and took probably six shots, none of which would come close to being an Author Photo. But what the heck, it was fun. 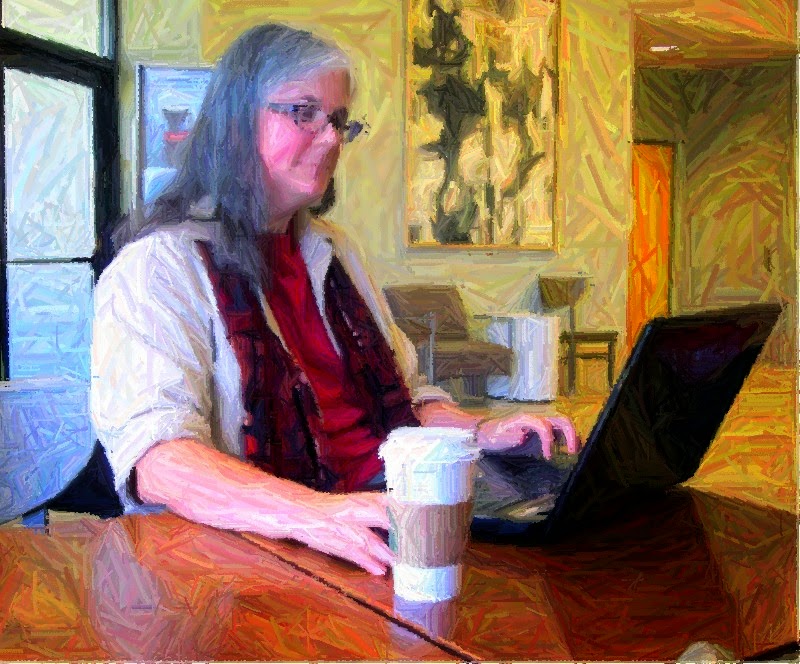 At the Coffee Shop
(Actually, it's the Starbucks in the Hospital Lobby.
I have yet to take a photo at Zoka.) 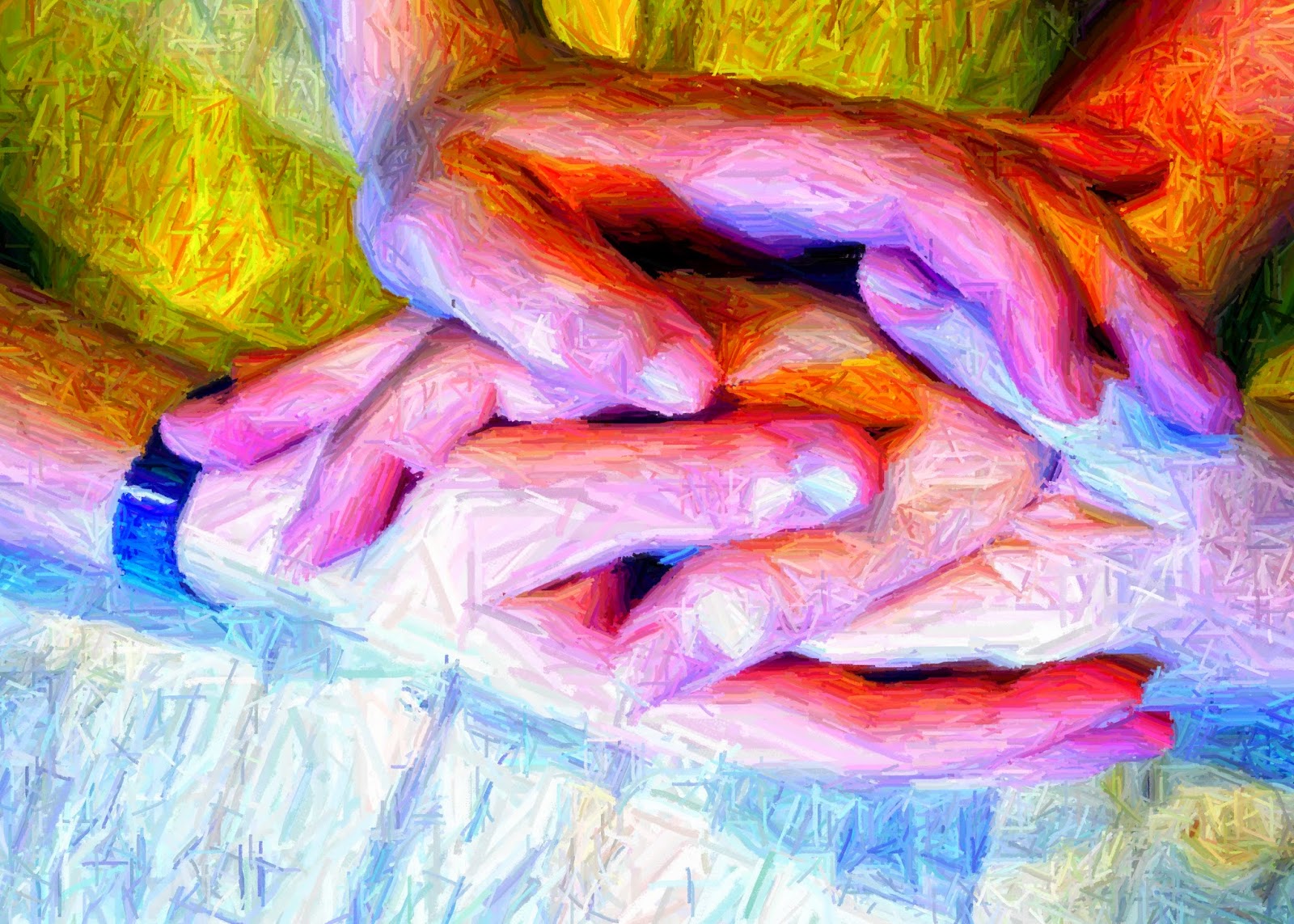 This shot was taken four days ago. I set it up as an image for an article or blog post I plan to write soon, about the interview I did last week with an Energy Healer. I've been doing a lot of research for my new novel, "Over the Edge". I'm conducting a series of fascinating interviews with REAL LIFE healers and gathering boatloads of material.

But I needed a cool illustration for the post. So I dragged my son over and asked him to hold hands with me. Wonderful 22-year-old that he is, he didn't even complain. We tried various poses with our hands, and were shocked that it wasn't as easy as we thought it would be! My husband helped. He took picture after picture, shaking his head and saying, "Nope. Not this one. Try again." It took a while, but we finally hit gold!

That's it for now.

For my next blog post, I will share the final few images and describe how I altered them. Thanks for reading!
Posted by Unknown at 9:57 AM