Guest Erotica by Author Nicole Ryan: What my Husband Wanted

A Huge Welcome to Nicole Ryan!

I am thrilled to host my first guest on my blog. Nicole Ryan is an amazing erotica writer from Seattle, generous with her knowledge of everything erotica, and I can't wait to share her work with you.  What My Husband Wanted is her newest work - and it is a sizzling hot read!  See below for an excerpt and blurb. 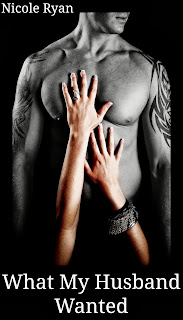 Isn't this the most delicious cover? 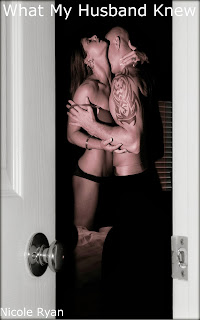 Or is THIS cover from the first book in the series even tastier?


Where to find Nicole's books:

Where to find Nicole:

Marlena opened the door to her house, the bags of groceries knocking against it as she shoved inside. The house seemed empty as she closed the door behind her and hefted the bundle of groceries into the kitchen. As she was putting them away she heard Christopher’s feet softly coming down the carpeted steps.

“How was your day?” He asked as he began putting away groceries.

“It was good. I saw Nora today.” She said, placing eggs in the fridge.

Marlena had started seeing Nora before she’d started seeing Brandon as a trainer. She’d been a beacon of light in a time when Marlena could only see darkness. She was more like a friend, a friend that Marlena paid a hundred and fifty dollars an hour to talk to.

“How did that go?” Christopher asked as he bit into a green apple.

“Fine.” She smiled at him quickly.

Christopher watched her as she continued to put fruits and veggies away, packages of beef from the local butcher were stored in the freezer and he noticed the contents left on the counter. Spaghetti. Christopher didn’t eat spaghetti, she never made it when he was home even though it was her favorite. It gave him terrible heart burn.

“Yes. I have company coming over.” Marlena said, glancing at him through the corner of her eye.

“No, someone else.” Marlena smiled at him playfully. “Yes, Brandon, is that okay? I didn’t think we had any plans, it’s Friday…”

“No it’s fine. I’m glad. I asked him if he’d come over more often.” Christopher said as he pushed off the counter and tossed his apple core into the compost bin.

Marlena began to slice into orange, red and yellow peppers, removing the stems and seeds. Her hands were nearly shaking and she chewed on the inside of her mouth. She rolled her words around, tasting them before speaking.

“You spoke with Brandon?” Marlena asked, her voice small.

“Yes, at my office on Tuesday.” Christopher’s smile wavered as realization washed over her face.

“What did you talk about?” She asked, her hand slipping and nearly cutting her finger.

Christopher grinned at her discomfort. “I’ve asked him to not bring you to his home anymore.”

Marlena continued chopping, not raising her eyes to meet his gaze. “I didn’t realize.” She said softly.

“I’m not upset. I just want all interactions between the two of you to include me. One way or the other.” He winked, melting her insides.

Christopher, with his stunning blond hair and blue eyes and the firm jaw and noble brow that she’d fallen for so many years ago, oh how she loved him. How she needed him. How she loathed him.

She clenched her teeth as she sliced and diced. Tossing ingredients into the pot and wiping her hands on her apron. When the doorbell rang she nearly jumped out of her skin. She closed her eyes for a moment and took a deep breath before leaving the kitchen.

One look at Christopher told her that he would not be leaving for the dinner. She eyed him cautiously as she left the kitchen wiping her hands on her apron, her bare feet padding on the wood floor softly. Pausing she took a deep breath before opening the door. Brandon smiled into her face, roses in one hand and his black gym bag in the other.

From the kitchen, Christopher could hear Brandon’s deep voice in undertones but couldn’t make out what he was saying. He thought they took longer than needed to return to the kitchen, but he reminded himself that this must be a shock to his wife. When Marlena returned to the kitchen she was holding a large bouquet of red roses which she quickly put in a vase of water.

“Chris, how are you?” Brandon said good naturedly as he held his hand out to Christopher.

Christopher took it and shook heartily, “Glad you could join us. Hope you like spaghetti.” He smiled widely.

“One of my favorites.” Brandon smiled.