My Purses Have Their Fifteen Minutes of Fame

ZeroLandfill Seattle was invited to air a five-minute slot on the New Day Northwest show on KING 5 TV in Seattle, Washington. The chairwoman of ZeroLandfill, Julie Lin, invited me to showcase the handmade leather purses I made from the recycled materials I gathered at last year's event. Here are my impressions of this morning's TV interview.

I went downtown to the KING 5 studio at 9:00 this morning, as requested, and parked in the guest lot across the street. Where I sat in my car, agonizing over which of my leather purses to bring into the studio - someone had mentioned "a couple" - which usually means two, right? But how could I choose two of the four? I'd gone ahead and thrown all four into the car with me, wanting to delay choosing until the last moment. Unfortunately, putting off the decision didn't make it any easier.  Which two purses were my favorites? Which would look best on screen? Maybe I ought to take the one that would stand up on its own, or perhaps it would be better to take the one that had a recognizable shape on it (a guitar)? Would the colorful one be better, or would the black-and-white one stand out more? Agggh! Too many variables. 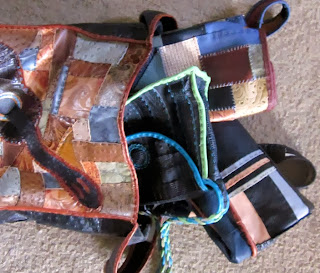 What the heck. I'd take all four of them and let them decide which ones they wanted.

I shoved the three smaller purses into the biggest one (the guitar bag) and headed across the street, where a friendly security guard named Toby let me into the building. I checked in, gave them my car license, then admired the fountain in the middle of the lobby where water cascaded over a series of flat gray discs. 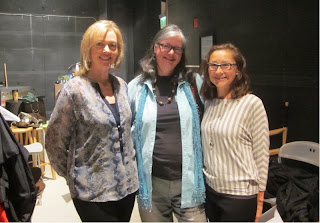 Me, with Julie and Hazel, before the show

Julie and Hazel (the co-directors of ZeroLandfill Seattle) met me and took me up a wide flight of stairs, through a spiffy-looking cafeteria, down a long dark hallway, and to the backstage area of the studio. There were interesting things all around: a rack of colorful clothing, paraphernalia from past shows, little vases with fake flowers, shelves of knick-knacky things, a roll of netting...and this: 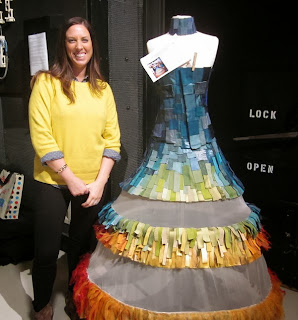 The dress was magnificent. It was weirdly odd, certainly, probably unwearable, and scratchy-looking too - but magnificent just the same.  I couldn't take my eyes off it, so I asked this nice lady to pose next to it, for scale.

The next thing I knew, a man - the stage manager? - went over to an eight-foot table and busied himself in arranging the recycled items that Julie and Hazel had brought for the show. I moseyed on over, watching him. Then I confidently put three of my purses (THREE of them! And no-one said anything!) on the table and he worked them into the display. I kept the guitar bag, because Julie said they might do a "spot" interview of me during the show, and I ought to have something to hold up and talk about. 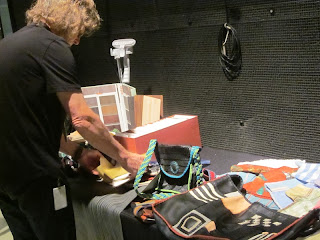 The third purse is still under the others in this picture, an issue that was soon rectified.

The other guest of the show, Mary Wright, arrived just then. She is a volunteer sixth-grade art teacher. Last year, her class made these wonderful critters with the recycled goods she collected at the ZeroLandfill event last year (the same event where I scored all the leather samples.) 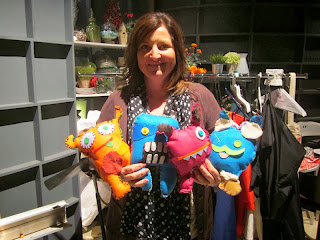 The delightful critters, made by sixth-graders.

A voice came over the loudspeaker: "Five minutes to air! Five minute warning!" The four of us were ushered into the studio, where a low bank of risers with folding chairs arranged on them faced the set. I was given a seat in the front row, next to the critter lady. We were both pretty excited, but we didn't have time to get nervous because things were happening pretty quickly. Another stage manager (I guess that's what she was?) led the audience in proper clapping technique. "Not quick enough!" she said, "as soon as that light flashes, you have to clap those hands together as if your lives depend on it! Come on! Faster! Faster! You're the slowest audience ever!" Everyone laughed. She had us practice until we got it right.

Cameras rolled out into the space between the audience (which was only about 30 people strong, mostly women) and the set. And a roving camera that was aimed at us.  And a camera on a long, long, long boom. And then a lady came and had me put a mic up under my shirt to clip onto my collar. "Turn your cell phone off," she said, "all the way off. Thanks. It can interfere with these mics." She grinned. "Plan on saying about two lines of dialogue about your work, okay?" And then she was gone. 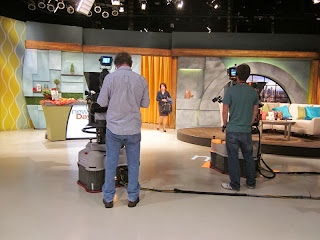 The show seemed to fly by in a flash. Brian Boitano, the Olympic Figure Skater, demonstrated a recipe from his new cook book. Simon Doonan, fashion insider, talked about fashion. And then, it was my turn! The cameras landed on me, and I said my two lines. Something along the lines of: "I went to the ZeroLandfill Event and there were so many beautiful pieces of leather, such lovely colors and textures, and they just BEGGED me to make something out of them - and here is what I made." I held up the guitar bag, smiling. Thirty seconds worth of a "spot" interview. And then it was over. 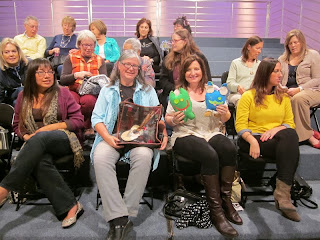 Me and my bag, and Mary with her critters, in the studio audience after the taping.

Surprises:
1. Everyone was so nice: the anchor lady, Brian Boitano, Simon Doonan, the security guard, the stage hands.
2. There are actually people who go to these tapings every single day...who knew? They make a career of it, apparently. The stage hands knew the names of several of the ladies in the audience. One regular audience member wears fun, flashy clothes to catch the anchor lady's attention - it seems to be part of what everyone expects. (Although the stage hand did very nicely ask the lady to turn of the purple flashing light in her plastic ring!)
3. There was an empty seat in the audience, so they pressed security guard Toby into sitting in it for the taping. (He didn't seem all that happy about it.)
4. The show gave out two free tickets to a screening of that new James Gandolfini movie to everyone in the audience.
5. We all got sample plates of the treat that Brian Boitano made on the show. I made sure to bring one home to share with Richard.

Now it's all over. It was a fun morning, something that I'll remember for a long, long time.

Edited to add: My good friend and duet partner Mark Francis found this video of the interview on the KING 5 website. Thank you Mark!
Click here to see the Video of the ZeroLandfill segment - and me!
Posted by Unknown at 6:30 PM