The Past, in Living Color 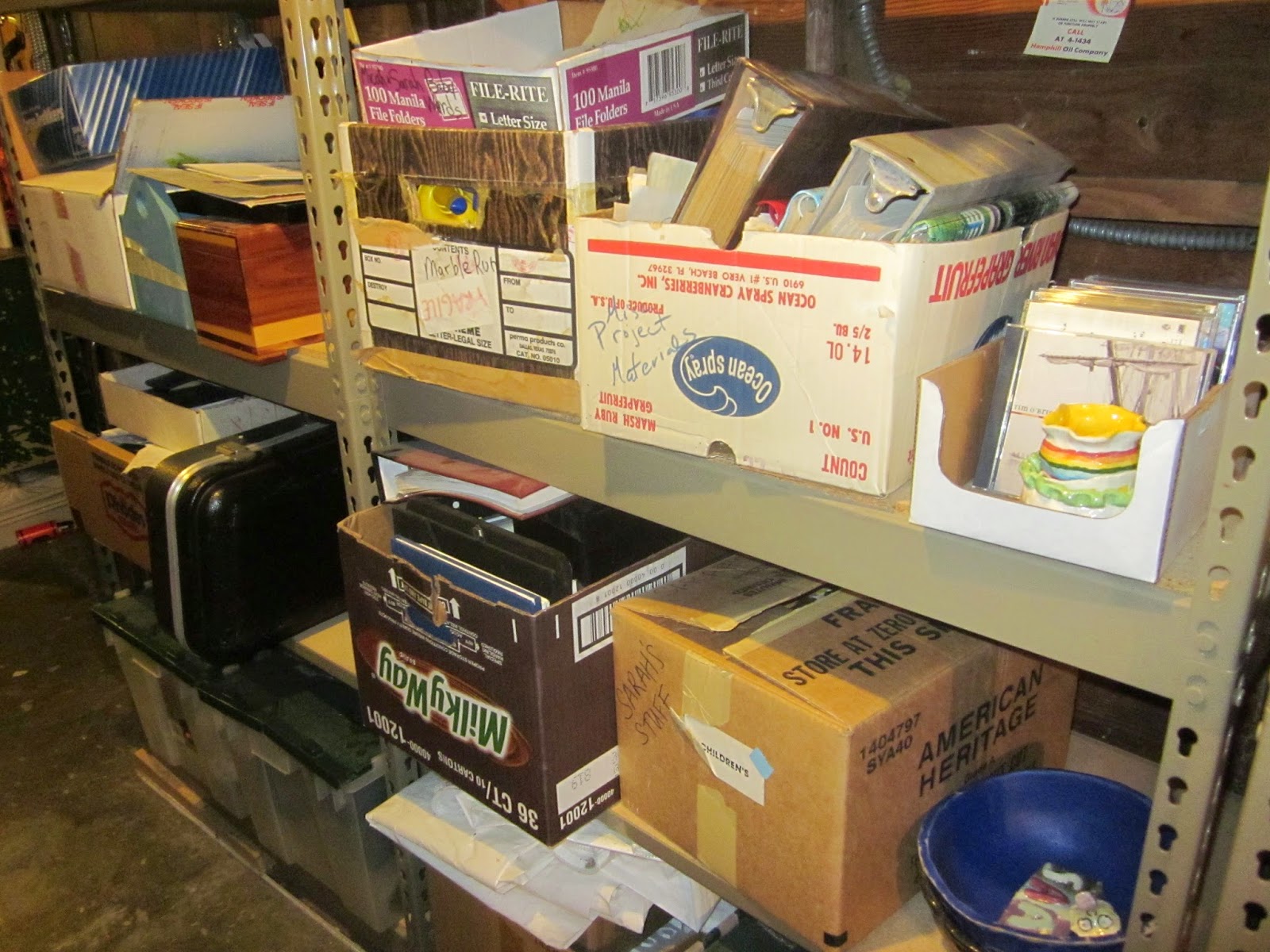 Very Important Stuff.
Stuff that none of us has looked at in years.
And this was just a small portion of it.


Downsizing. We're still at it. It's the reason I haven't done much writing for the past several months or updated this blog as often as I'd like to. This is the designated summer for the Arvey family to put some real, honest-to-goodness effort into downsizing - at least that's what we're calling the reaming out of the house of all manner of stuff we don't need any more.

We've been at it for months. Here it is, already the next-to-last day of August, and we are still going through the house. We've carefully looked into each box and every closet and drawer and bookshelf, sorting and getting rid of stuff and making some very hard choices along the way. But even with our eleven trips to the Goodwill donation station, there is still a lot of work to be done.

Today's job:  We tackled the old (and wonderful, some of it) school work and artwork from when our three kids were little ... about ten enormous boxes full! Four of us (and a few cats) spread out in the living room and started pulling papers and paintings and hand-drawn cartoons and stapled-together books one at a time out of our designated box, deciding which pieces merited saving and which were destined for the recycling truck. It was tiring, tedious work, interspersed with moments of true delight.

I found it staggering, how much there was. Apparently, we kept all of it, every assignment and drawing and book report and doodle ... all the way up to high school. For three kids. All of it. 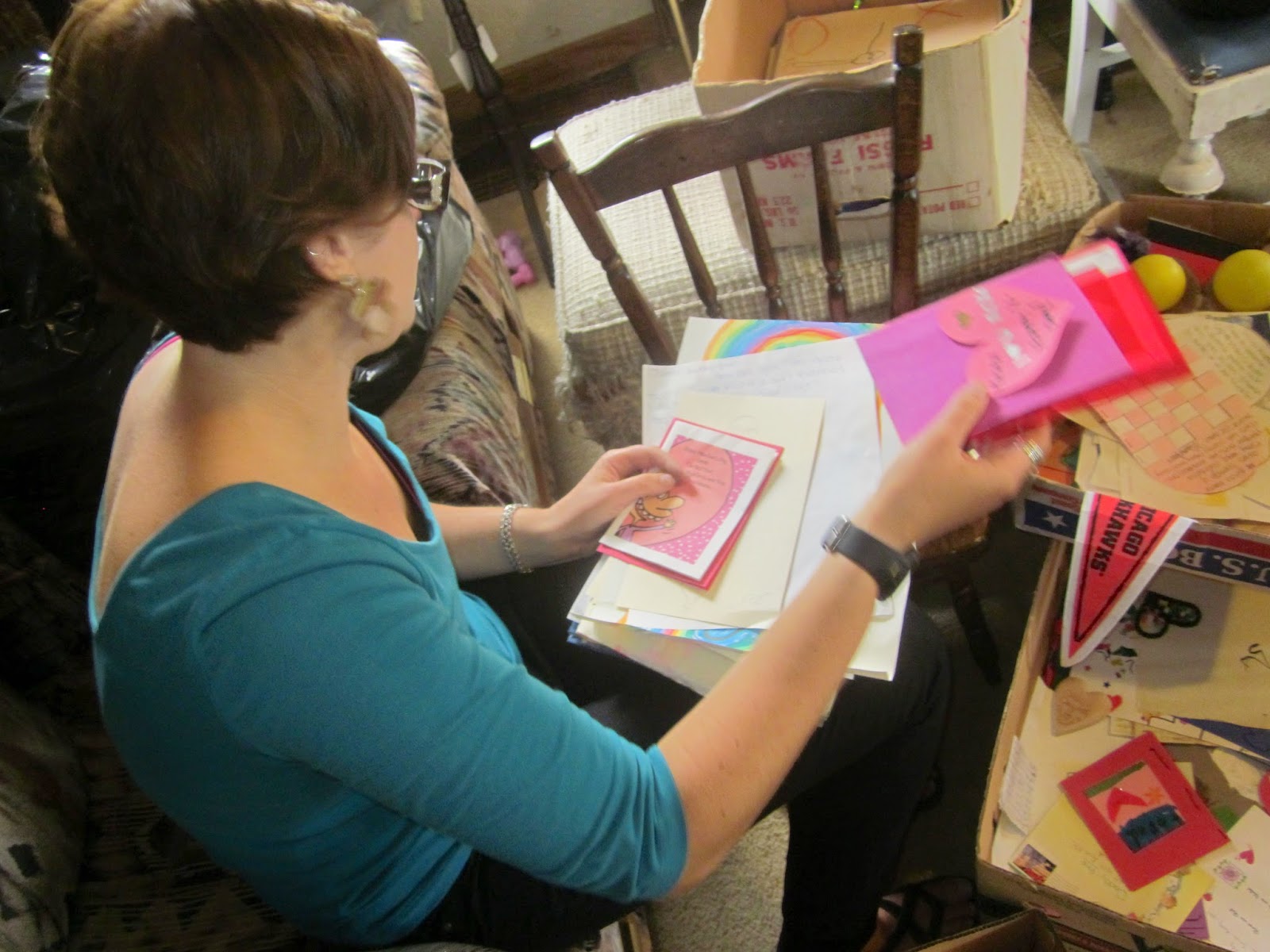 Sarah, going through one of her many boxes. She was the homemade card queen! 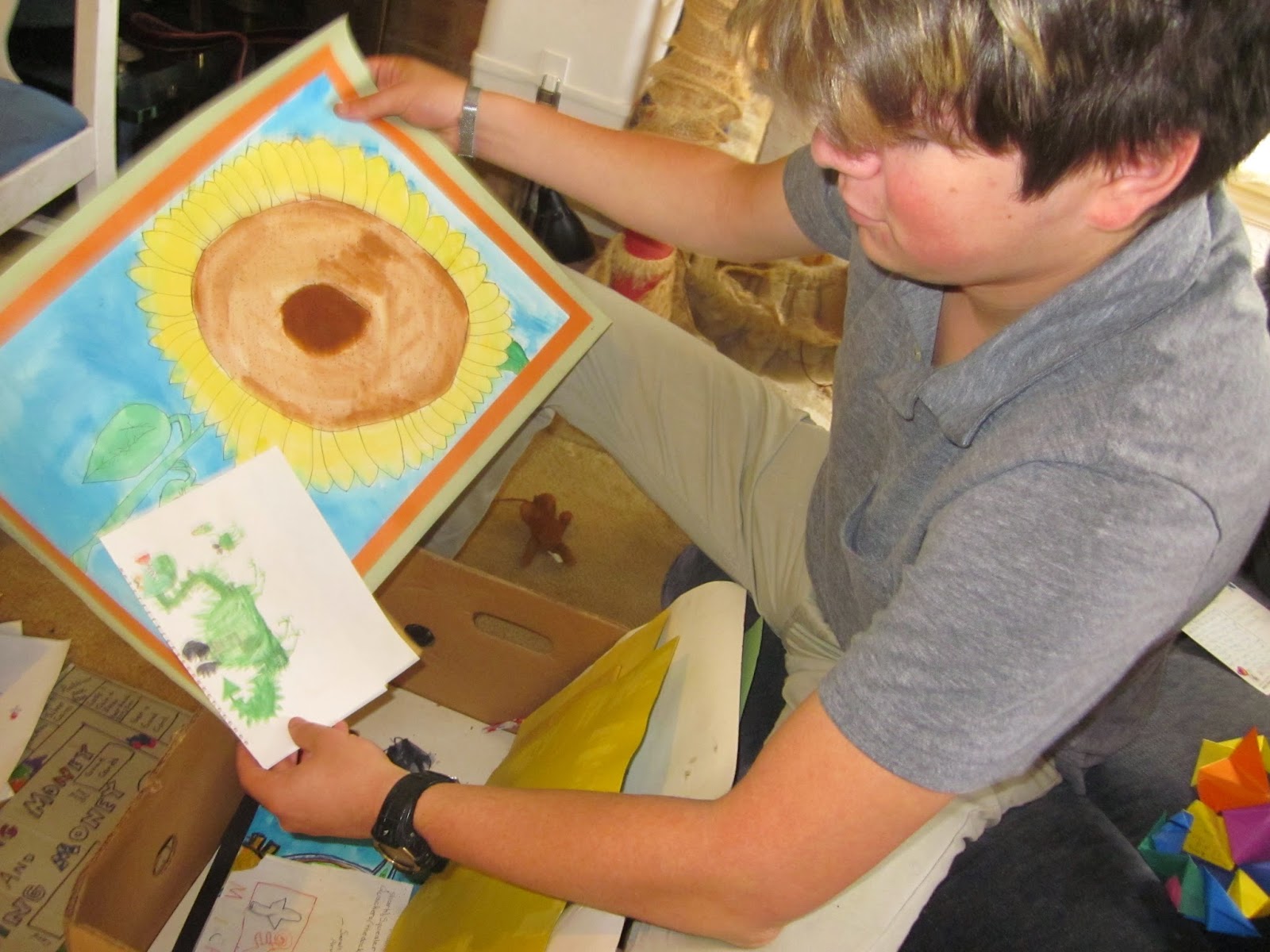 Micah, considering the fate of the green spiky dinosaur he drew in the fourth grade.

Some memorable lines of dialogue captured by the writer in the room:

2: "Do you know what? I was actually pretty good."

3: "You'd have to say I was prolific, wouldn't you?" (Said while contemplating a knee-high stack of papers.)

4: "Ha! Look at this! We were just as awful then as we are now! This PROVES it!" (Accompanied by wild laughter.)

6: "I did this? I don't remember doing this." The drawing is held up to better peer at the name penciled in on the lower left corner. "Are you sure this was mine? I have no memory of it." 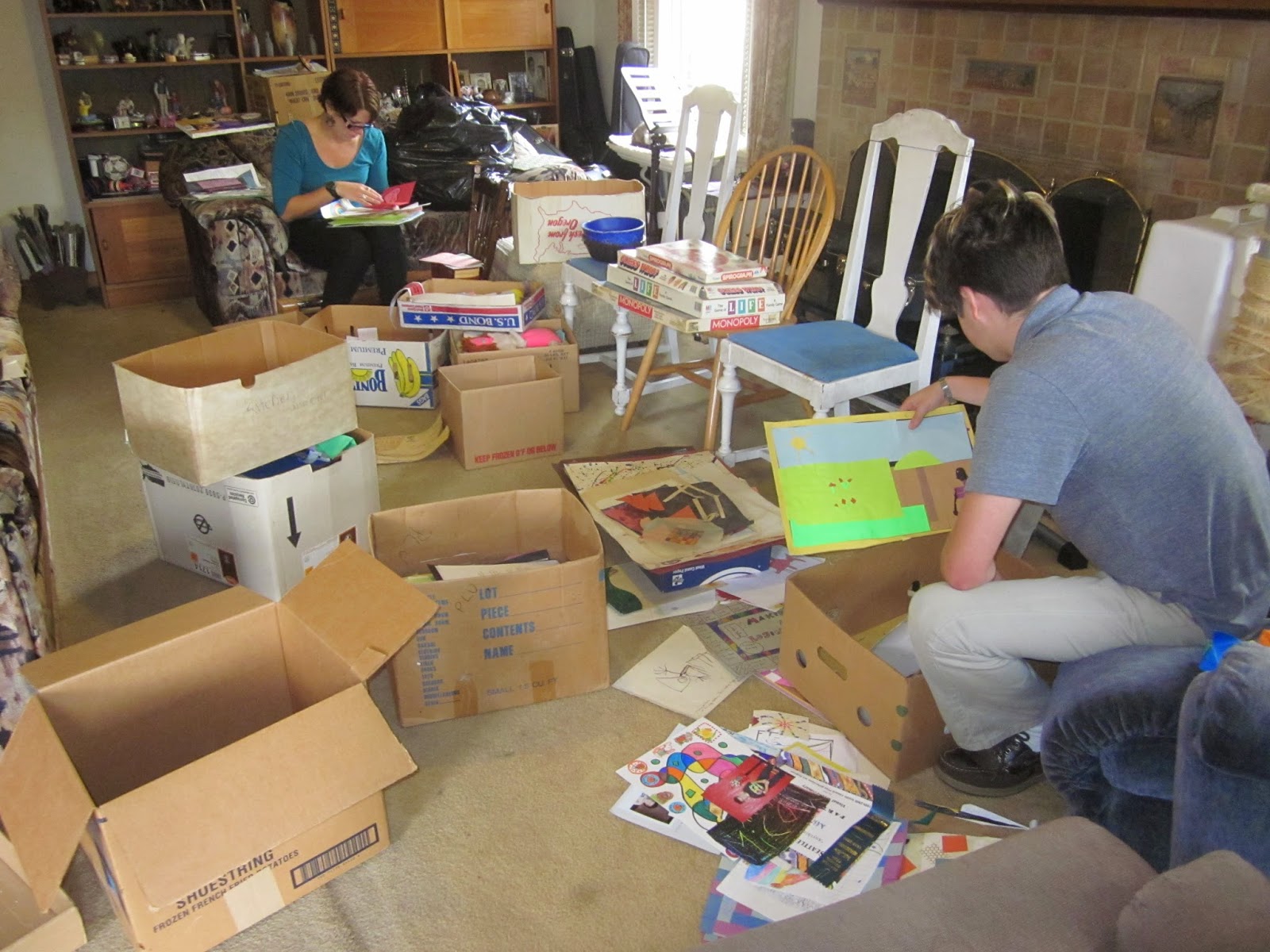 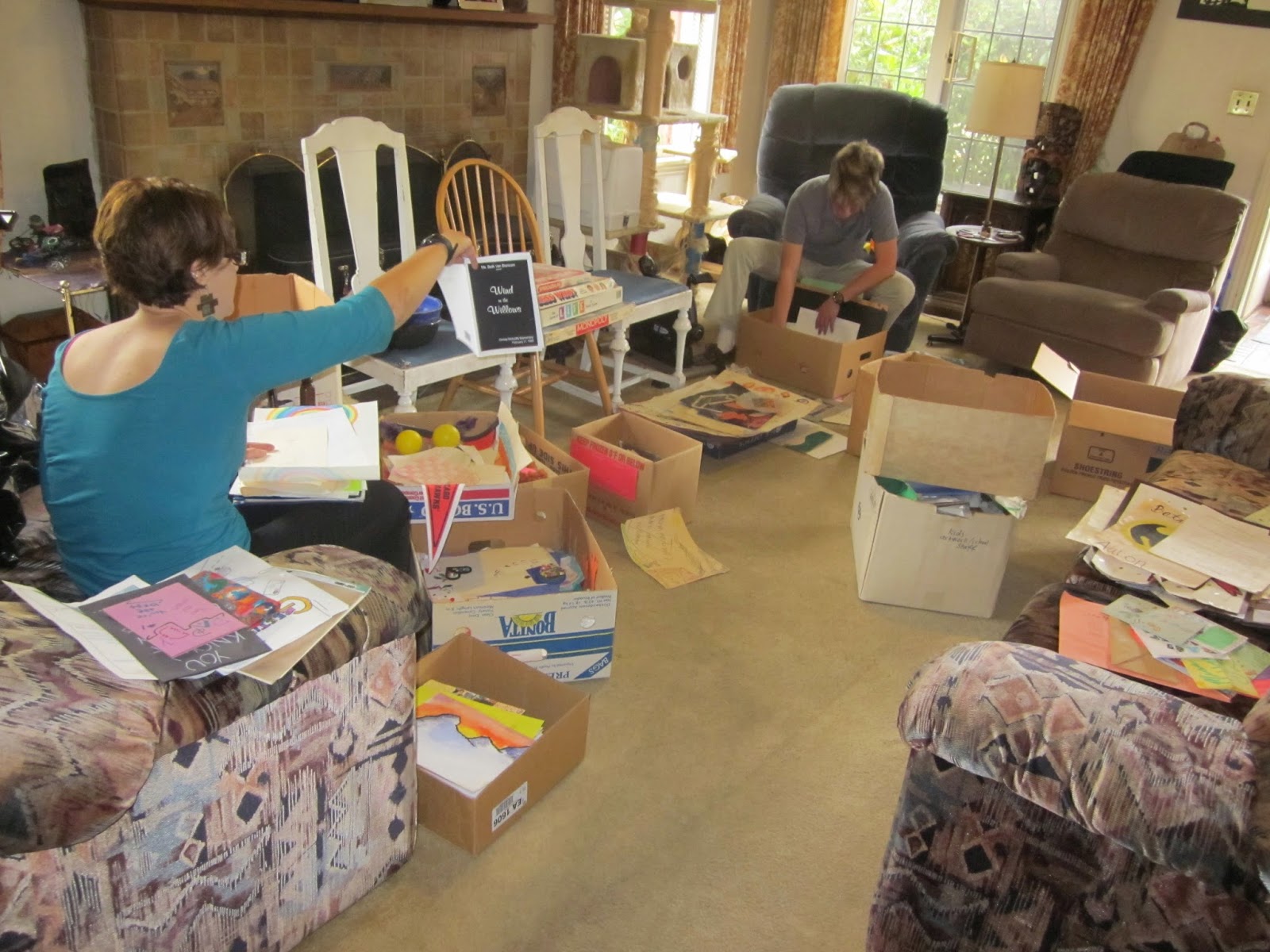 Finding the program for her middle-school play, an exciting moment. 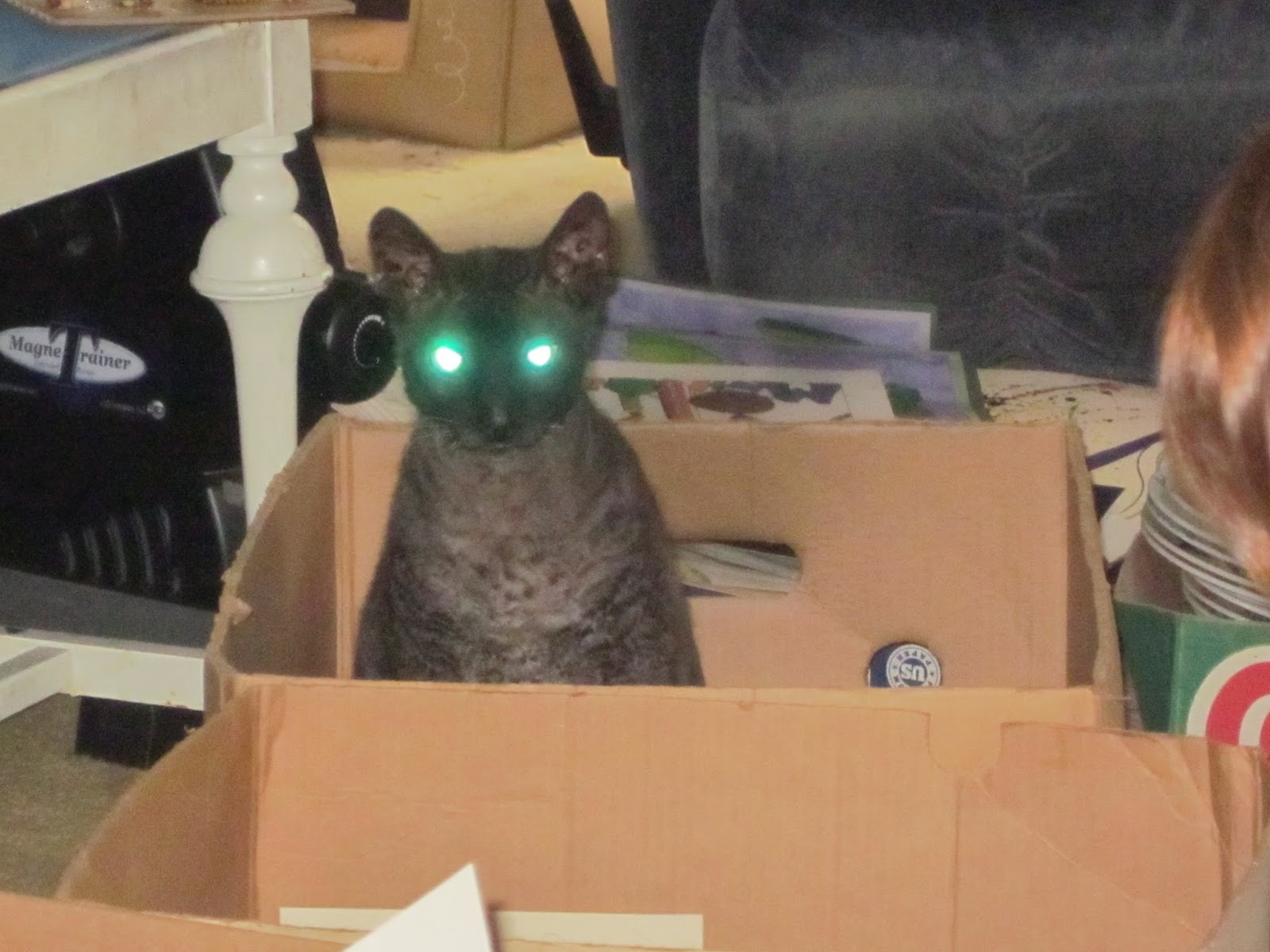 Smokey, with the Devil eyes!
He jumped in a box and was watching Sarah's every move as she worked on her last box of the day. I snapped this cute picture of him - and his eyes flashed just as I clicked the shutter. This is how the image turned out, for real!
I did nothing to it.

That's all for now! Tomorrow, Micah and I will haul all of the reject boxes out to the curb to be taken away by the city recycling. The chosen artworks have been neatly stashed in small, flattish boxes and returned to the basement. (Until the next time we take them out and look through them, I suppose!)

Who Knew There Were So Many in our Home? 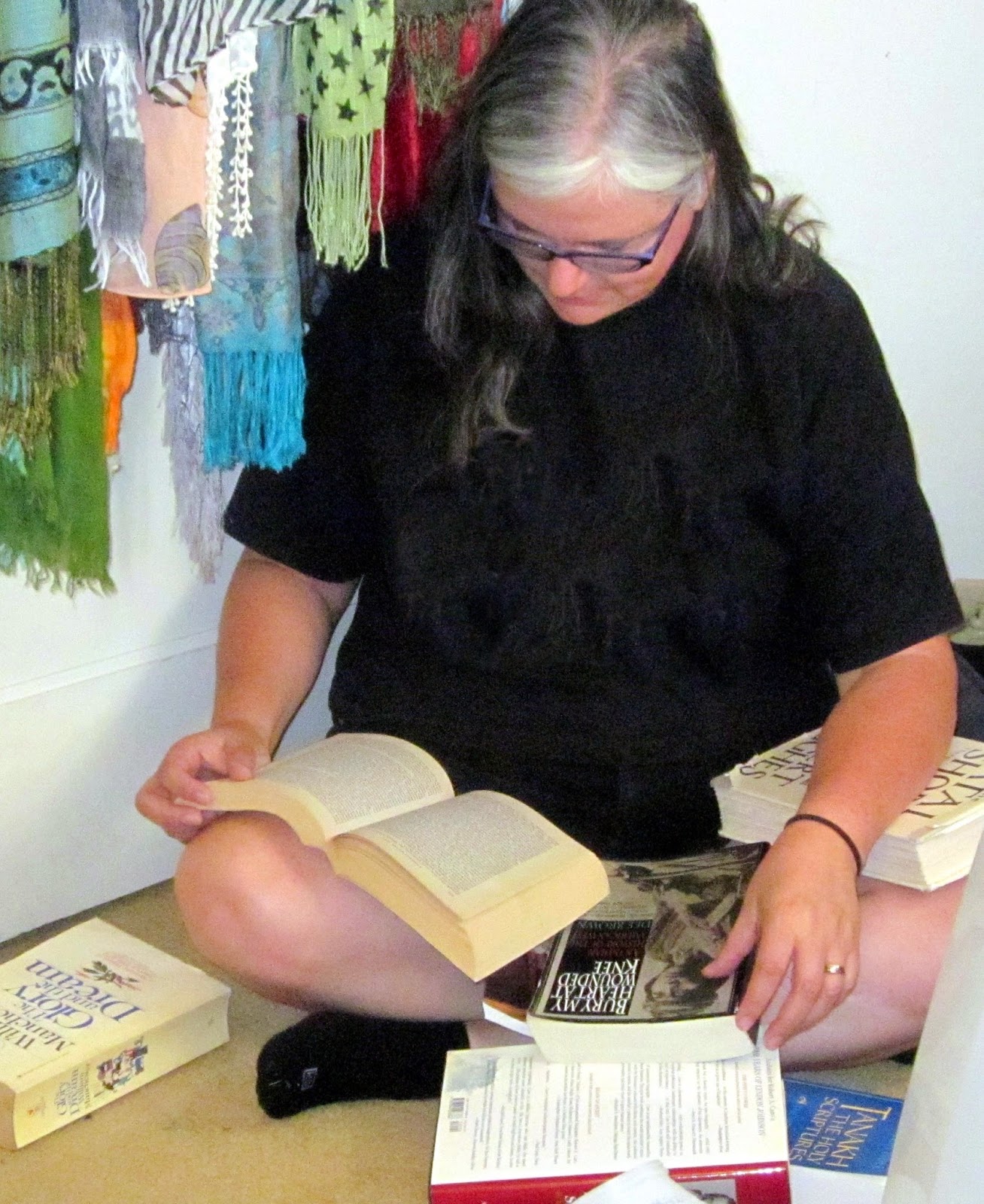 Books are memories, of the best kind.

As part of a major down-sizing, my husband and I have decided to go through our many hundreds of books and give away the ones we no longer want. But...wait. Wait! Wait! What if I want to keep them? All of them? What if I still love the row of battered Little House books with the yellow covers that that I read so many times as a child? What if I can't bear to part with the ones I loved as an adult? Books such as Maia, by Richard Adams; Lilith's Brood, by Octavia Butler; Undaunted Courage, by Stephen Ambrose; Bury My Heart at Wounded Knee, by Dee Brown (in my hand in the below image)? And so many others! How could my husband and I possibly choose between them? 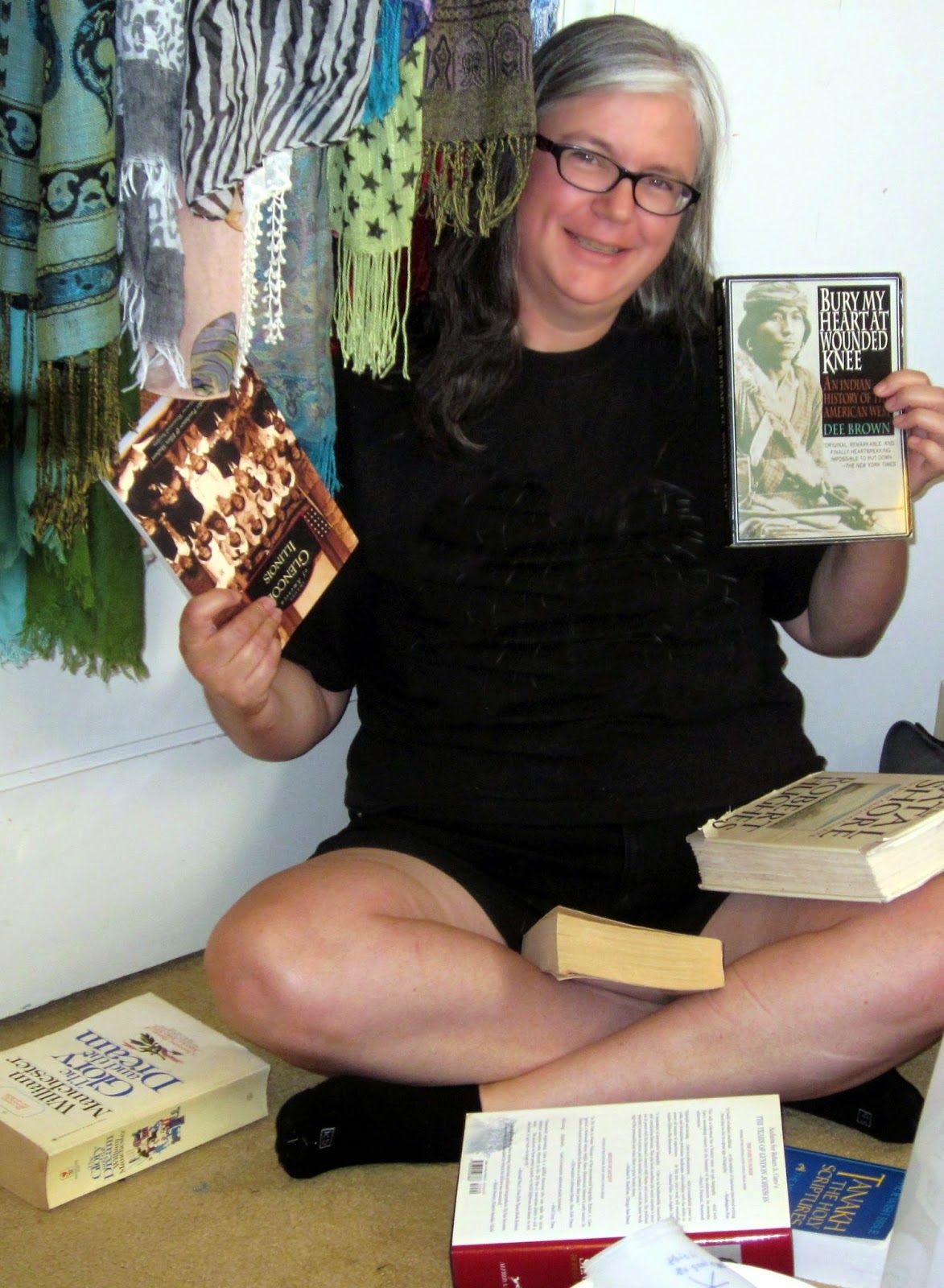 This was much harder than I'd thought it would be...

The truth of the matter is that they can't all be favorites. The nature of the word "favorite" makes that obvious, right? Since there are books everywhere in this house, scattered in bookshelves in almost every room, there have to be some books that truly are favorites ... absolute, indisputable, jaw-dropping favorites. All we need to do is take the time and effort to sort through them to find the best of the best. 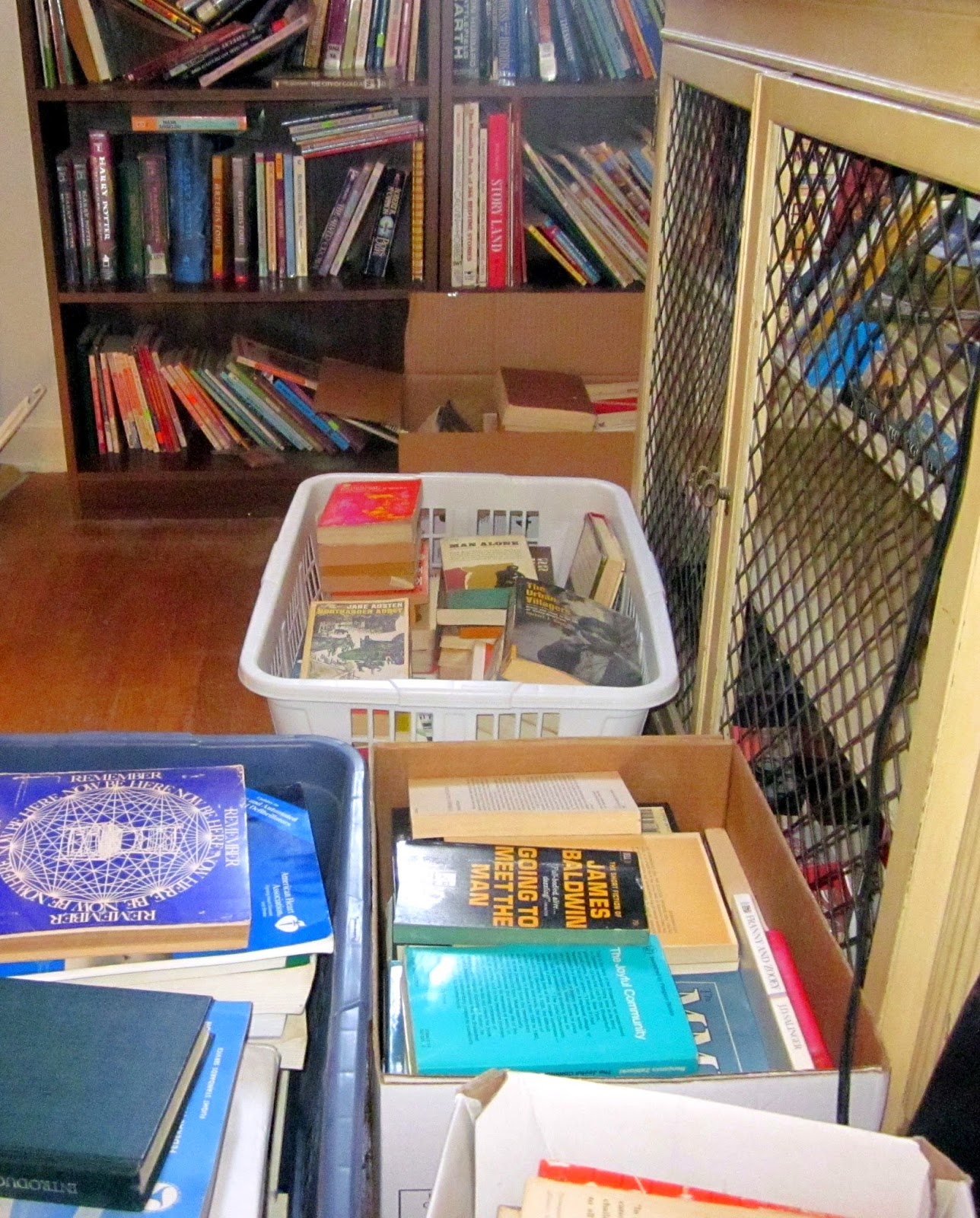 I started with my personal shelf in the bedroom. Then we moved into the guest bedroom where the motherload lived and called in help. My kids came, wonderful people that they are. They wrestled boxes upstairs, pulled books from shelves, looked for books here and there they wanted to keep. Good thing they're here. Books, it turns out, are sooooo dangggg heavvvvy.

During the past week, we've gone from room to room sorting and boxing. Here is a list of just how many books we'll be giving to the Friends of the Seattle Public Library for their book sale:

* Four boxes of my favorite old novels from our bedroom (Goodbye Clan of the Cave Bear, by Jean M. Auel. And also Stranger in a Strange Land, by Robert A. Heinlein, which my son took. I hope it will blow his mind like it did mine when I was his age.) 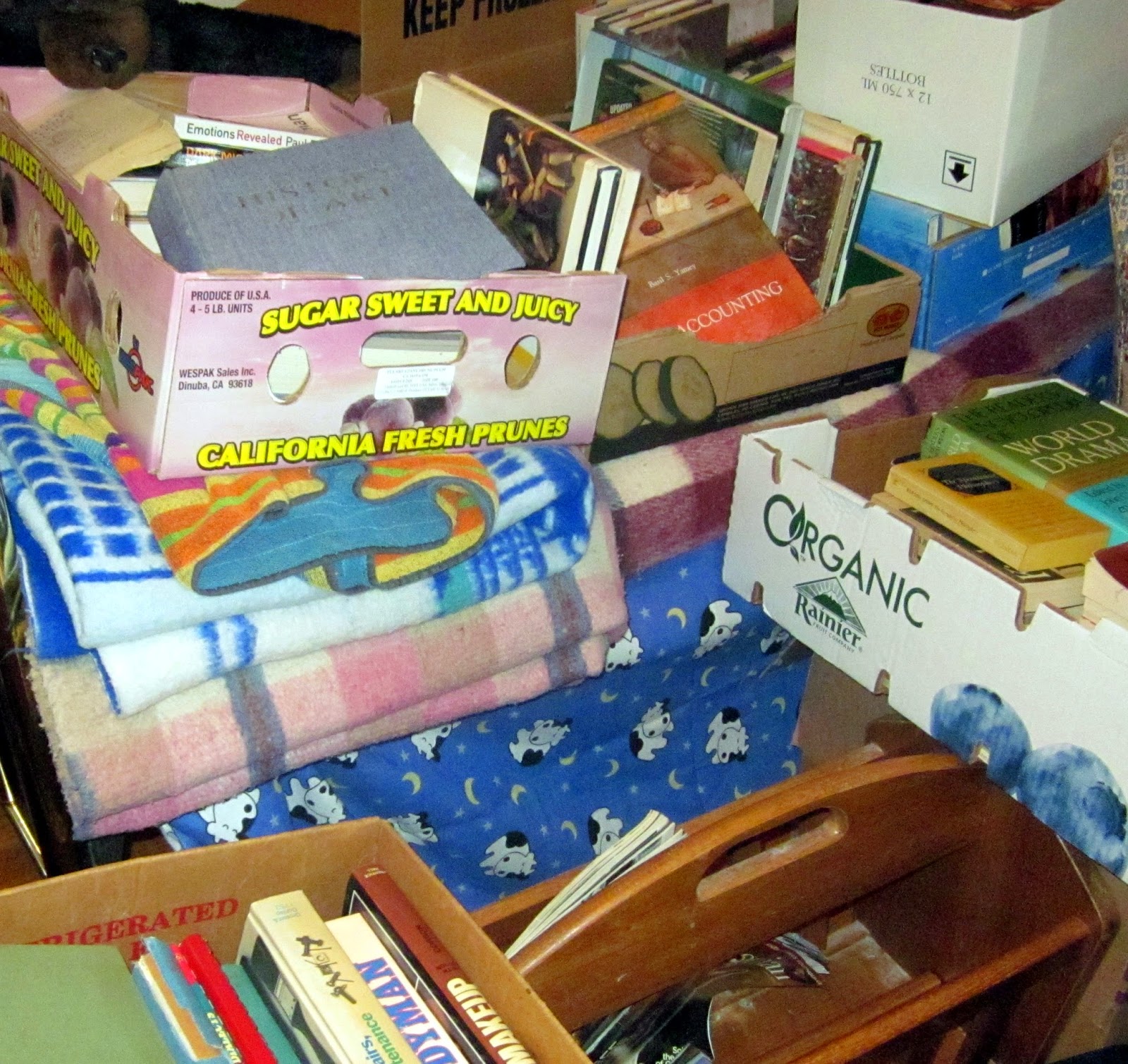 * Five boxes of random bookness from the basement. (We carefully set aside my husband's beautiful old leather-covered Hebrew bible from his Bar Mitzvah.)

* One box of cookbooks from the pantry. (Goodbye From the Kitchens of Oklahoma Housewives, an old old notebook that my grandmother and her neighbors put together...hmmm...perhaps I'll offer that one to my daughter...I did keep my Better Homes and Gardens red-and-white checkered cookbook, of course. I also rescued a book devoted to cookies and several Weight Watchers cookbooks. Hey. They're really good recipes, even if I'm, ahem, not actually doing Weight Watchers any more.)

* One box of lovely crafting books from my studio. (Beautiful Wire Jewelry, oh, how I loved you!)

* Two boxes from my daughter's old room. (Most of the Harry Potter books. She's taking them with her.)

* Six boxes of my kid's favorite children's books... (My son kept some good ones: Wizard of Earthsea, From the Mixed-up Files of Mrs. Basil E Frankweiler... such great books!) 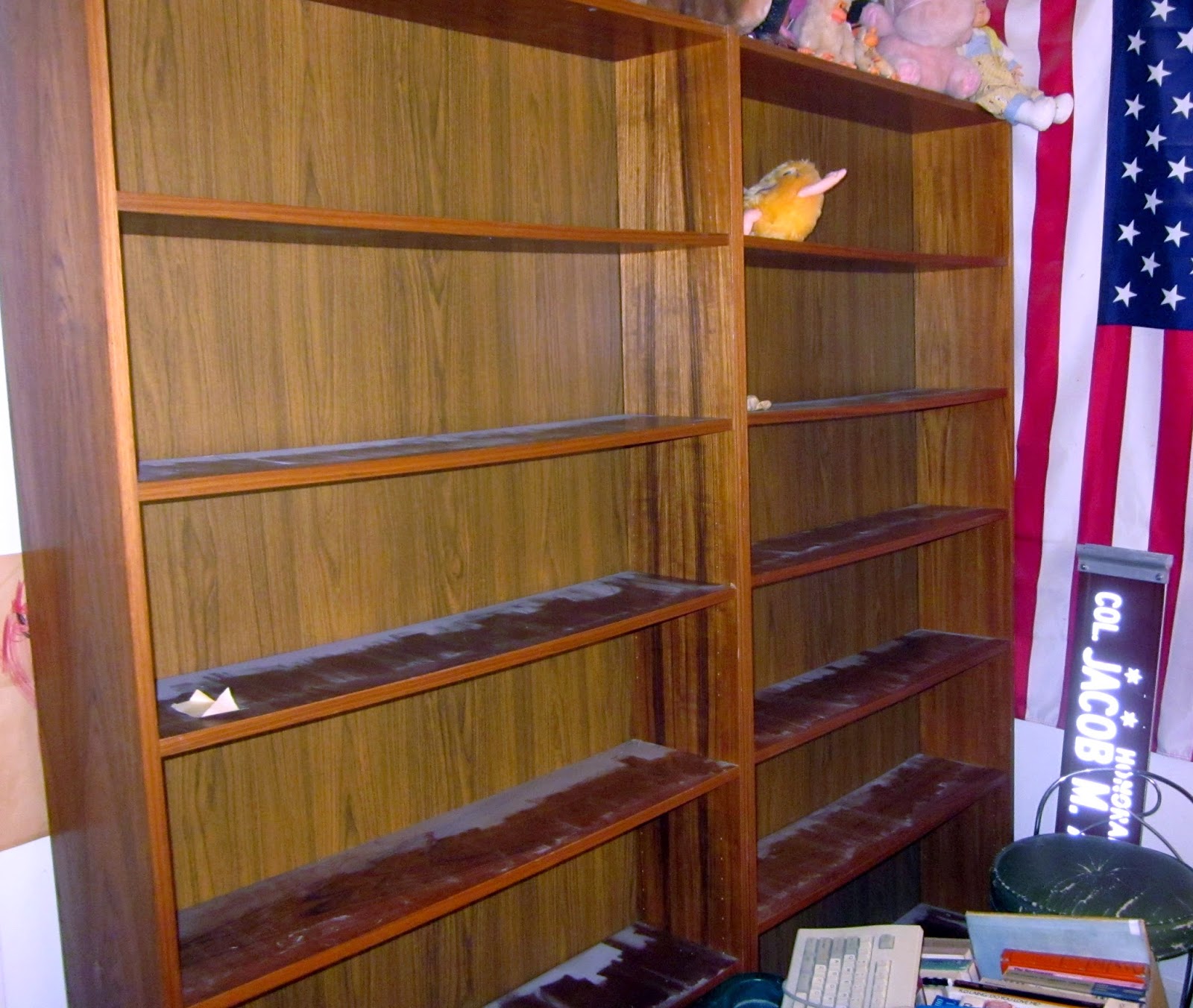 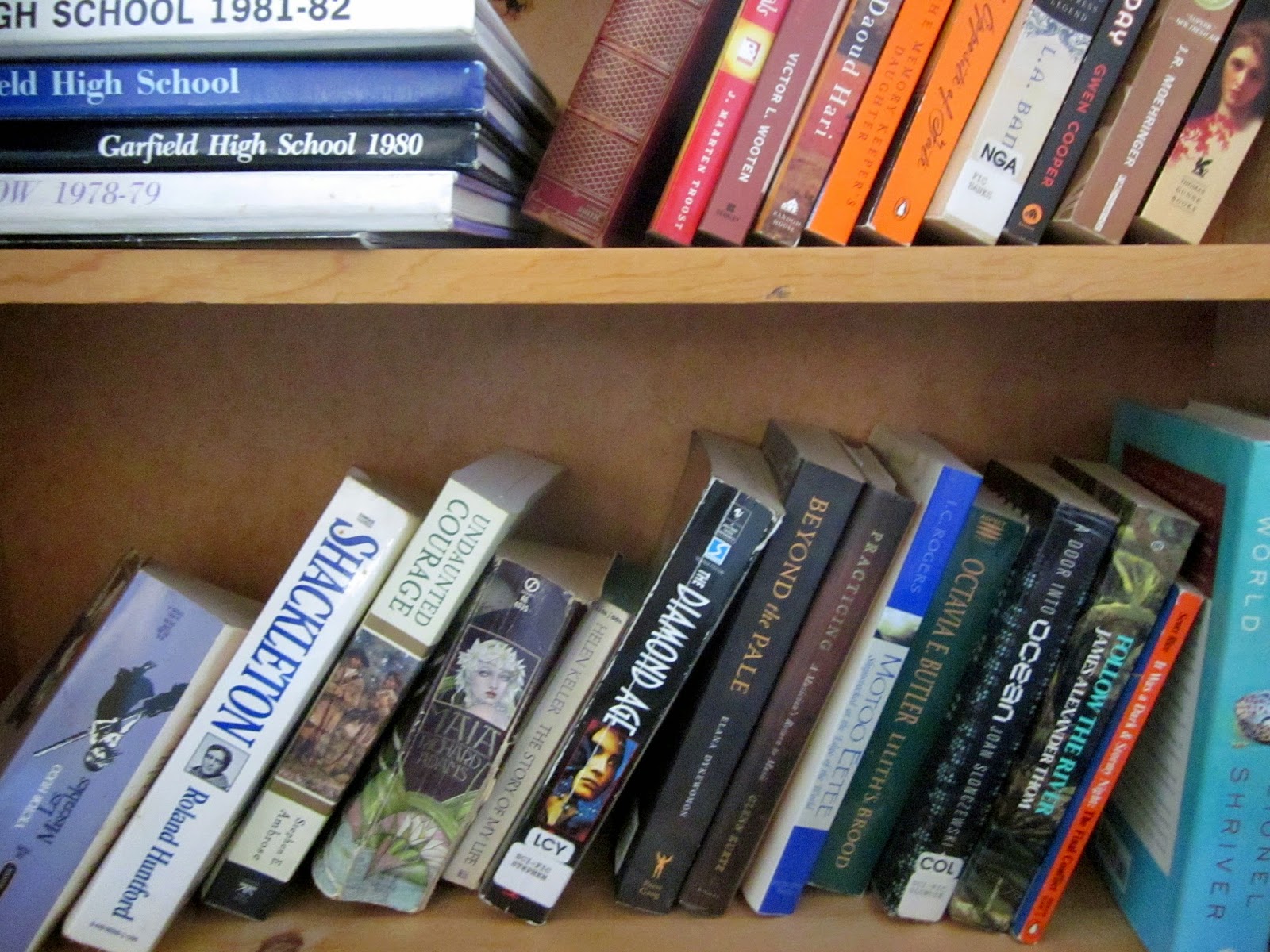 Some of the books that made the cut.

The many, many boxes of books are now waiting until tomorrow, when my son and his friend can load them into my SUV and deliver them to the Friends of the Library donation area. I console myself with the hope that someone else, somewhere, someday may enjoy them also.

Do you have your own story about the books you love? About hoarding them? About letting them go? I'd love to hear from you!
Posted by Unknown at 12:34 PM No comments: