When I began this blog, I promised to share all of my creative pursuits...and also the occasional glimpse of my private family life. This is one of those times. I am so proud to be the parent of a recent Stanford graduate that I have written about the trip we took last week to be with him on his big day. I hope you enjoy it.


Micah Arvey: The Unparalleled Graduate
A Play in Three Acts 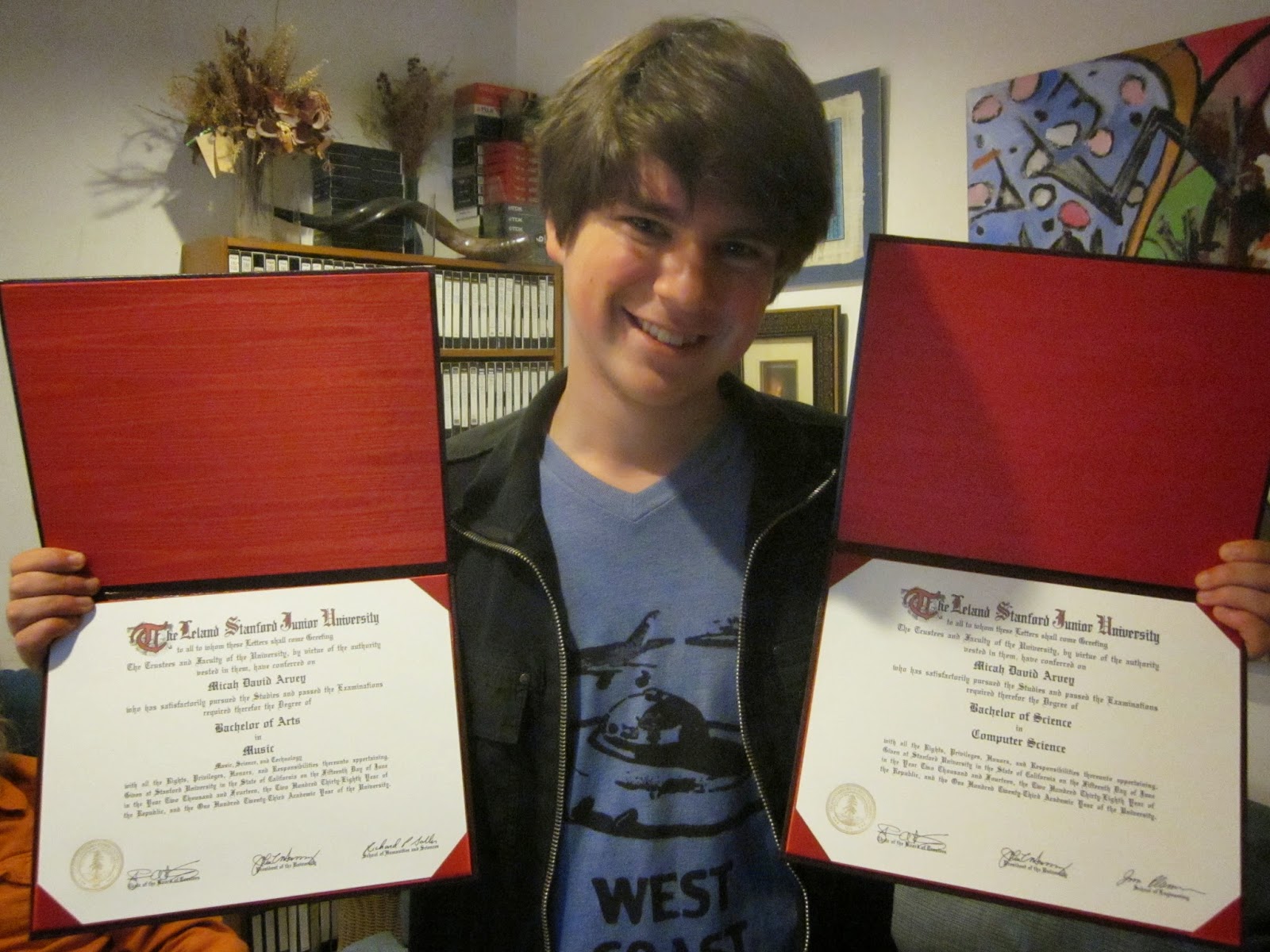 Micah, with his dual diplomas

· Micah Arvey - The main character of our story. An overachiever at the best University in the country, with two degrees. He is an all-around amiable guy, the only person on campus who has five guitars in his dorm room, the only person in the world who has ever had a naked Mermaid suddenly appear unbidden on his desk, demanding to accompany him to his graduation ceremony.

· Richard and Evelyn Arvey - Intrepid travelers otherwise known as VIP's (Very Impressed Parents). They braved airplanes, a bit of hysteria, recalcitrant lower limbs, and armloads of carry-on luggage to be with their beloved son, the star of our show, Micah Arvey, on his graduation.

· Sarah Arvey - Devoted and "up for almost anything" big sister. She good-naturedly bunked in a college dorm room and slept on a questionable couch, all so she could be with her little bro on his graduation.

· Aaron Arvey and Cate Bradford - The epitome of loyal and loving family. They were there for many, many of Micah's important college moments over the years, and were first in line for his Graduation events.

· Drew Barnett - Good forever friend. A trustworthy guy to have in the car on the long drive back home to Seattle, in a car he helped to stuff with four years of Micah's college detritus. Oh, and with three of the aforementioned five guitars.

· The FIFA World Cup - Honorary Cast Member. Seen on television screens wherever possible, as often as possible, and for as long as possible.

The date is Friday, June 13. It is a sunny but not too hot day in Northern California. Mom and Dad arrive in San Francisco in the mid-afternoon. They go out to Mexican dinner with Cate and Aaron (who very conveniently live very close to their motel) and sample various delicious enchiladas and engage in delightful conversation.

And the star of our show? Micah is doing...who knows exactly what...probably last minute getting-ready-for-graduation-weekend stuff which most likely involves indie beer. Sarah comes in late the same evening, hangs out with Micah at a teriyaki joint near the airport, then they pick up Drew at almost midnight. Who knows what time they got to sleep...or did they?

The date is Saturday, June 14. Mom and Dad partake in a leisurely breakfast at their motel, watching the World Cup. At halftime, Mom has a great idea: "Let's walk to Cate and Aaron's, what do you think?" She doesn't realize that, although Aaron and Cate's place is within shouting distance of the motel room, to actually GET THERE, it will be necessary to hike around a mammoth-sized block that is so long that you cannot see the end of it. She's been told this fact by her well-meaning son and daughter-in-law, but didn't quite take it in. Mom and Dad make the journey, and finally, they all watch the soccer game.

Mom, Dad, Cate, and Aaron meet up with the rest of the party at lunchtime - and with the star of the show...Micah Arvey! They all go to the world's best Hummus Restaurant, and the only thing Mom doesn't like about the place is that it isn't in Seattle. Everyone loves it and eats too much. Especially Drew, who vacuums up several more plates of food after everyone else has finished.

Mom and Dad, and eventually everyone else, gather to watch World Cup game number two.

In the afternoon, everyone meets up at Stanford for Official Graduation Number One - The Native American Ceremony. First, there was dinner. Chicken and mashed potatoes and cute little fruit tarts. As dusk fell, about forty Native American graduates and their families gathered for a heart-felt ceremony where the graduates were each invited to speak, as well as random assorted persons such as: their parents, grandparents, aunts and uncles, siblings, cousins, nephews, friends, next-door-neighbors, college recruiters...you name it. Everyone was invited to speak into the microphone, with no constraints as to time. Everyone took them up on it. As you can guess, the ceremony was at times lovely and touching and heartfelt, but at other times, um, it seemed to be never-ending.

My favorite part? When Micah received his gift, a gorgeous black and white (with splashes of other colors) Pendleton Wool blanket. Seeing him wrapped up in it brought tears to my eyes. It reminded me of my own grandfather. When he was feeling especially Indian, which was often, he would wrap up in his blanket. It tugged at my heartstrings, seeing past generations in my own son.

My other favorite part? The Makah mother-and-daughter duo from Neah Bay of Washington State who sang and drummed a beautiful love song written by an ancestor.

Afterward, at Richard's request, our family group made our own little ceremonial gathering where we each told Micah what we wished we'd thought of to tell him when we were on the stage with a microphone thrust in our faces. It was a very nice way to end the day.

The date is Sunday, June 15. Once again, Mom and Dad's day starts with the World Cup. They have elected to forego the Stadium graduation and instead to meet up with the rest of the family for Micah's Music School graduation at 1:00.

Micah brings the Mysterious Mermaid Maiden who'd inexplicably appeared in his room the night before. Apparently, he wore the Mermaid on his head for the silly part of the Stadium graduation. Cate assured us that many, many pictures were taken.

Micah is one of twelve graduates in the School of Music. We all clap like mad when he walks up to the front to receive his diploma. The ceremony is over before we know it, and we gather in a nice little courtyard for a buffet and live jazz music. Oh, the food! There was salmon and shrimp and chicken teriyaki and yummy little appetizers wherever I looked. Much better than what the Indians had provided...

Mom and Dad went back to the motel for a rest and more World Cup. Micah, Sarah, Cate, Aaron, and Drew kept going: they visited Micah's other graduation party, the huge one for Computer Science. They reported that it was nowhere near as good as the Music buffet. The food was boxed lunches, for god's sake. And the organizers hadn't even provided enough of them.

Later in the afternoon, we went into the depths of San Jose for a garden party hosted by the parents of one of Micah's Fraternity brothers, where we met some of Micah's friends and watched cute girls pay close attention to him. As we left, Cate and I were invited to pick lemons from a tree growing in the host's front yard.

A full day, a very full day, and a fantastic graduation weekend, replete with awesome memories. We are so proud of you, Micah! 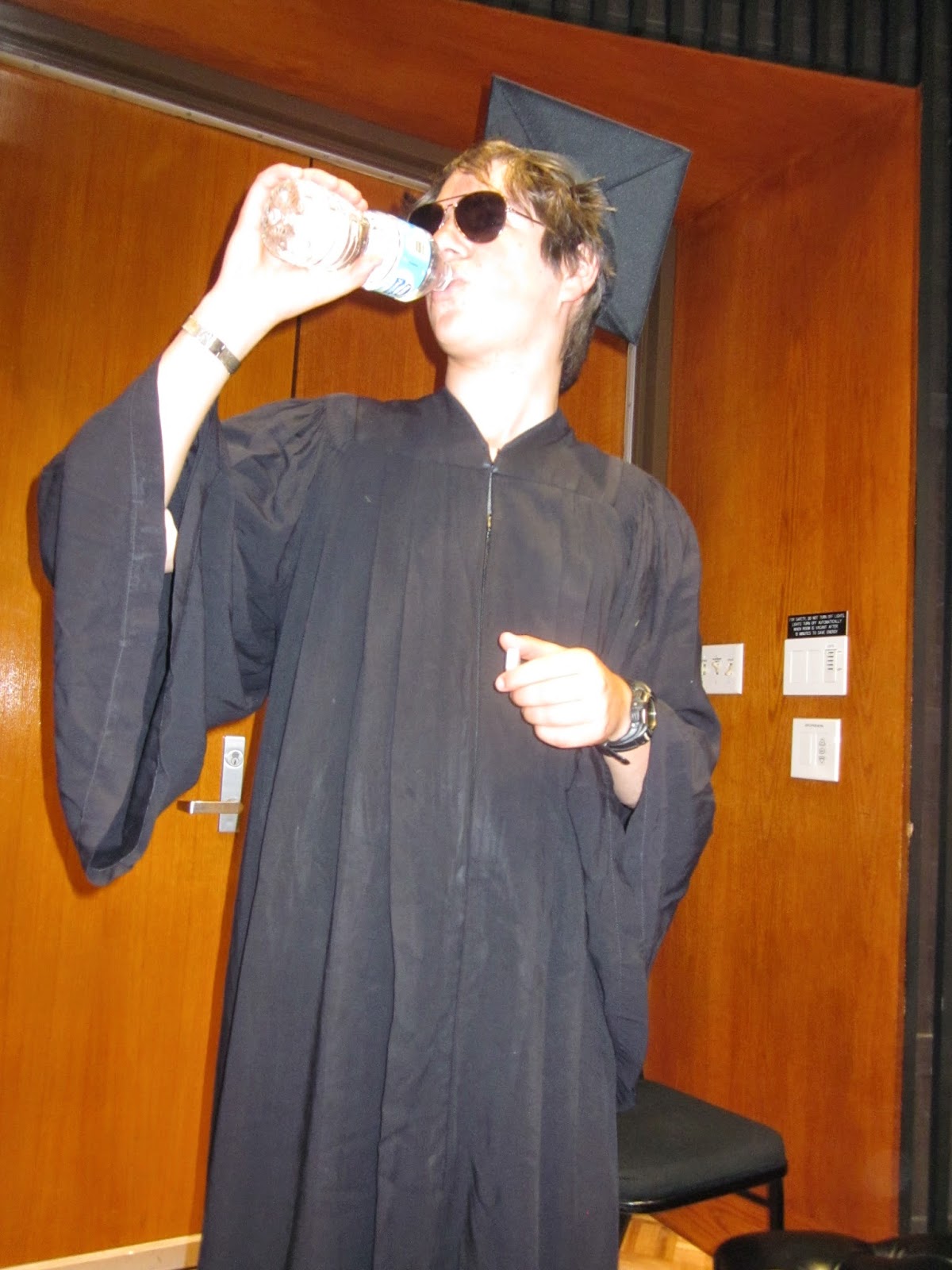