Remembering to Breathe - Classical Guitar In the Recording Studio

As many of you know, for more than four years I've been playing in a classical guitar duo with my great friend Mark Francis. It's been wonderful. I've loved every moment of it. 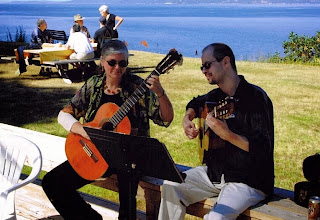 Our first gig - a lovely event in a beautiful island setting

Our goals from the beginning have been to:


I'm proud to say we've followed the path we set out for ourselves. Mark and I have been committed to our music and kept our duo going strong even when life tried to get into the way. We've encouraged each other to go further than we ever thought we could - and we have the YouTube videos to remind us what hard work can achieve. It's taken a while, but we've attained every one of our goals except for the last: making a CD.

And that goal is closing in fast! One more recording - one more! - and we'll have enough to make our first CD. The time has now come to pull it all together - we have that last piece: the final movement of a delightful Vivaldi concerto. All we have to do is get a good recording of it.

Three days ago, on a windy, rainy Wednesday evening, Mark and I drove to West Seattle to work on doing just that. Kevin Callahan, our teacher, is a gifted mentor and it's safe to say that the Arvey-Francis Duo would never have gotten where we are without him. 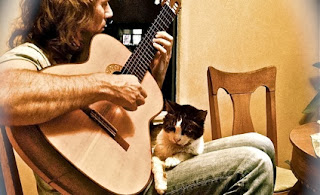 Kevin is multi-talented: he is a composer and a software coder as well as a guitar teacher. He also has a great studio. This is where Mark and I headed, hoping we'd come out with a good recording.

It doesn't always happen. It's very hard. The week before, Mark and I had tried to get a live recording: we played the Vivaldi piece over and over and over - but something always went wrong. Twenty-one times something went wrong...twenty-one takes! By the end, we'd exhausted ourselves and just couldn't get it together. So we went back again to West Seattle the next week to give it another go.

Mark and I let ourselves in to Kevin's outer studio, the small room we call the "ante-chamber". We took out our guitars to let them acclimatize to the inside temperature, and began to warm our fingers - which is my way of saying that the Vivaldi piece (concerto for two Mandolins 532) goes at LIGHTENING SPEED and there is no way of playing those bursts of triplets if your fingers aren't at tip-top condition. We ran through the Vivaldi piece several times. After a while, Kevin ushered us into the studio proper.

Mark and I looked at each other. Oh-oh didn't sound good, not at all.

Mark and I waited as Kevin fiddled with the recording stuff. I tried to keep my fingers supple as Kevin downloaded a patch (or something) to repair the sound card (or something). 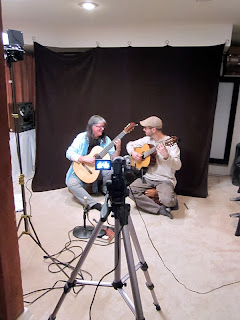 Keeping our fingers supple in the studio

Finally, the faulty programs were repaired. Kevin adjusted the microphones one last time and did several sound checks. He sat down at his console and nodded. Mark and I held our guitars up at the ready and took deep breaths. Kevin raised his right hand - his signal to start playing.

We did. We played six whole measures. Then we came to a screeching halt.

"Sorry about that," I said. "My finger missed the note."

We did. We started over. Over and over and over. Nothing new there. Each time we'd get partway through, make a mistake, then have to give up. In a live video recording such as this, there is no going back later and "fixing" bad notes. What you play is what you get. With every mistake, we had to go back to the beginning and try again. We'd shrug our mistakes off - or try to - and start over with a fresh start, doing our best each time to capture the energy and life that Vivaldi requires.

Good thing we'd stopped at our favorite cafe, the C&P in West Seattle, for tall full-caffeine mochas right before our session, even though it was 7:30 at night. We needed all the help we could get. 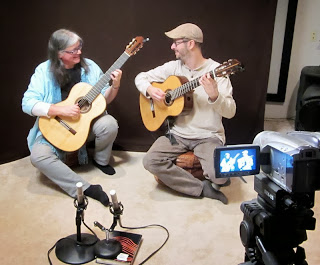 Recording - you can see the miniature Arvey-Francis Duo on the camera screen.

With a slightly-too-enthusiastic final chord, we played the Vivaldi all the way through! We'd done it. We were ecstatic. Speaking for myself, at least. All you have to do is look at the grin on my face at the end of the video to know how pleased and relieved we were to have achieved it.

Our next project: to gather all our recordings, tweak them so that they sound great as a set (with Kevin's help), and make them into a CD. We hope to have it ready for the Holidays.

An apology to Kevin: I know I have the recording scene terminology all wrong. Forgive me?

A bonus: The C&P is the world's greatest coffee shop, in a wonderful old house in West Seattle. If you're ever in the area, stop in and say "hi" to the owner, Pete. Tell him the Arvey-Francis Duo sent you! http://www.candpcoffee.com/

A final note: you may have noticed Mark and I are wearing different clothes in the pictures than we are in the video. That's because I took the pictures on the week we didn't manage to get a recording. Bummer!

As always - thank you for reading my blog. I hope you enjoy the music! If you would like more, here is our duo website: http://www.arveyfrancis.com/
Posted by Unknown at 11:39 AM